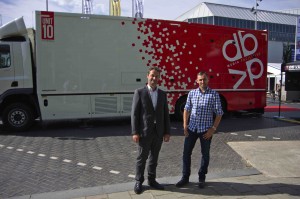 Beyaert and Melotte with their new Unit 10 at IBC

The concept of remote production is usually discussed in the context of handling production of a distant event from a traditional studio, with only the cameras on site. However, Belgian OB and facilities company, DB Video has brought remote production closer to home, by designing its latest OB vehicle, Unit 10, to handle multiple remote productions on a single, but extensive, location.

This approach is particularly effective for large music festivals where there are several stages some distance apart, but is equally applicable for race tracks or other large sports events, according to DB Video’s CEO, Dimitri Beyaert.

It is based around Riedel’s MediorNet system, using MicroN and MetroN frames, plus Compact Pro stageboxes, “which means we can be in four or five locations, with several cameras in each, with one OB van,” he explained.

For example, it recently covered Tomorrowland, in Belgium, the world’s biggest dance festival, where there are several stages with a considerable distance between them. “Instead of pulling cables from the TV compound to every stage, we now use MicroN and MediorNet to do remote control productions.”

It only needs one fibre cable to the stagebox to give it full remote control of the cameras, with intercom, and video transport. “It can go over IP also, but while there is still no fixed protocol for IP, we use now the fibre system,” he added.

The new OB is mainly being used for Belgian broadcasters VRT and RTBF, and its first use was to cover all the Belgium games in UEFA’s Euro2016 in France. Since then it has also been used on rugby and basketball (DB Video is rights holder for Belgian basketball). It took part in IBC, and in the near future will be covering the European Baseball Championship, and the European NASCAR series.

“The main thing in this truck is the Riedel matrix system, which was chosen because it is a de-centralised router. We can put the components of the MediorNet where we need them, and they are all connected through fibre optics to the MetroN router,” explained Michel Melotte, chief engineer, who designed the concept and masterminded the production of Unit 10. 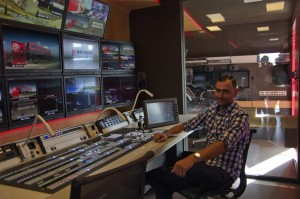 Melotte in the surprisingly spacious Unit 10, in front of its large window to the audio area

“In the OB van, the distances aren’t so big, but when you need extra systems outside the OB van you can increase it easily using the MicroN modules,” he added. “For example, we use it to build a remote hub, so you can put the camera base stations outside the OB van, even some kilometres away. It’s easy to interconnect them,” or where they have another OB truck, it is easy to connect the two.

Unit 10 has a Grass Valley Karrera 3M/E 64-input/32-output vision mixer, Riedel intercom system (which is in all of its vehicles), and VSM control. “They [Lawo] had to convince me when we first had VSM, but it is such a powerful system, and combines so well with MediorNet. It is so clear and very well integrated,” that it is now standard in all except its one older van, said Beyaert.

The 11.6m truck can have up to 16 Grass Valley LDX-80 cameras, including two high-speed models. The LDX cameras were chosen “mainly because they are easy to use,” and the company has standardised on them, said Melotte.

Ready for IP and UHD

Although the cameras, like the truck, are HD and SDI, “we can easily upgrade the van to future technology, like IP, because Riedel is developing its software to cater for newer IP standards. If we need a bigger router because of 4K signals, we can easily add MicroN modules to get more ins and outs,” explained Melotte. “Most of our production is HD now, but we tried to build a truck that can grown with the technology.”

The multiviewers are also Riedel, as they are integrated with MediorNet, “which is a big advantage,” said Beyaert. “We have six MicroN modules that do multiviewing, all integrated with VSM to do tallies,” added Melotte. It uses Lawo Vpro 8 for colour correction, and has a Sony OLED monitor wall.

MediorNet also handles synchronising and embedding/de-embedding, which means “we could use less glueware [although it does have Axon conversion and distribution modules], because you could do so much in the system. It meant we could have more space for the people.”

Indeed, the 3.9m-wide single expanding sided truck feels more like a double expander. “It gives a very spacious feel,” said Beyaert. This is enhanced by having a large window to the audio area. Of course, all those reflections normally wouldn’t be good for audio mixing, but they installed Genelec 5.1 digital SAM monitor speakers, which do an automatic listening test to measure reflections and compensate for them.

“It was important that it is spacious and comfortable to work with and not too technical,” said Beyaert. “You need to be at ease in the OB van so you can concentrate on your work.”

The truck took some nine months to complete, from concept to delivery, and cost about €3.2m, including 12 cameras. The coach building was done in Belgium, by Moeyersons, and the interior design by Studio Dott. The engineering, systems integration and cabling was done in house in co-operation with SDeye.

Unit 10 is DB Video’s biggest truck (of four). It also has 12 multi-camera fly aways. “We integrated MediorNet into the flight case, so you can make an easy connection between them,” said Melotte. One of DB Video’s major clients is the European Parliament in Brussels and Strasbourg (doing all the audio visual facilities), for which its uses the fly packs as they make it easier to meet security needs – and to use on the 11th floor of buildings.