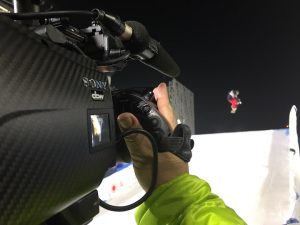 One of the many major snowboarding events that now dot the global sporting calendar, Big Air in the City took place on the Parco Experience site near Milan in mid-November. Both snowboarding and free-skiing championships took place during the sporting spectacular, which culminated in the four days of Big Air in the City, for which Rome-based DBW Communication provided OB services under the supervision of technical manager Bruno Midolo.

The artificial snow-enhanced event is based around a custom-made ramp off which the snowboarders or skiiers launch into the sky and undertake their awe-inspiring performances. The central tournament area is surrounded by a purpose-constructed alpine-style village featuring food stalls, exhibition spaces, entertainment areas and more, all contributing to the festival-style atmosphere.

Needless to say, the broadcast capture and AV elements of the event also contributed significantly to its overall success. “For this event we employed our flagship van, a latest-generation mobile unit, OB14 FlexIPvan, that is [enabled] for 4K, HDR [and IP]. All the video signals of the gallery travel on IP technology, anticipating a little what the future of television production will be, which requires that each camera has its own unique and dedicated IP address. Then, through the SAM matrix – which is central to this all IP project – we can manage all incoming video and audio signals in the different areas of the control room.

“To manage this event, DBW brought in its mobile unit, OB14 FlexIPvan, well-known because it was made in tandem with Betamedia and the engineering [expertise] of Rosario Messina for the IP technology. [Also important was the concept] of modularity and sections made of ‘technological bricks’ that can be really customised, avoiding [the movement of equipment that is not necessary for a given projects and can be better used elsewhere].

“Specifically for snowboarding in Milan, 13 4K and HD cameras were used because the final airing was in HD, while two were micro-cameras in 4K. In addition, and given the importance of the event and the spectacular [images it makes possible] a camera with an Ultra-Motion system was also used, precisely because the client had requested ultra-slow motion shots. 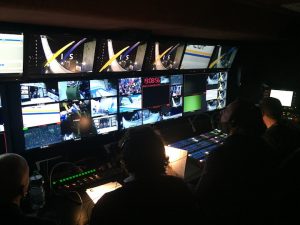 “So we decided to bring on the field a Sony 4300 camera of the latest generation, enabling 4K, with a Sony 4000 server that makes it possible to manage 8 video streams. In HD mode the system can work in Super Motion or Ultra-Motion. DBW owns ten Super-Motion licenses, two of which can operate in Ultra-Motion with 400 frames per second.”

Inside the control room

Midolo went on to outline the workflow in the control room, which he said is “managed by our proprietary system that [makes it possible to] connect the cameras positioned for the remote shooting at kilometres away from the mobile unit. Here it is enough to call up the unique IP addresses that allow each camera to be recognised and prepared for use inside the van. Currently the IP signals arrive in the luggage compartment and no customer, for now, has asked to work completely in IP technology, but we are experimenting with great success the [option for] managing everything in IP, even within the OB van control room.”

“In fact, all we need is a LAN cable with 50 or 100 GB of available bandwidth (based on the number of cameras we have to carry) and then only the camera addresses.

“Of the 13 cameras, only one was set up with a radio link and dedicated to follow the public and the athletes before the trial, in the parterre. At the jumping point, two cameras were shooting, one of which was the Ultra-Motion. A Jimmy Jib was placed at about [the half-way point] of the [ramp], a PoleCam at the start and two micro cameras placed at the beginning and end of the track in the athlete’s descent. All the shots were in 4K, even if the broadcast was then made in HD with a downgrade of the images.

“We are equipped, if needed, to simultaneously provide signals in HD, in 4K and in 4K HDR of the same event, with diversified streams. In fact, we are the only company in Italy to shoot with UltraMotion in HD and Super Motion in 4K with the latest generation EVS XT4K [server, which was used for the replays].” 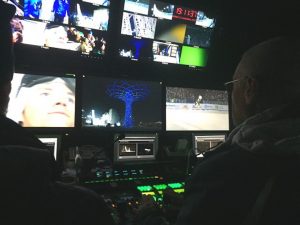 To set up for the event “took a week, including the tests and line-ups. In general, shooting a ski event means challenging wiring, but in this case [it was simpler than usual thanks to] the far smaller distances to cover. To realise this production 25 technicians were deployed, including operators, cameramen, sound engineers, producers, boom operators, etc. Each camera had a microphone for audio cuts during the descent. From the point of view of the director it is interesting to note, however, that [with[ being the trial so fast, using many cuts on several different cameras is practically impossible.

“It’s not the case that the great number of camera images available here were used mainly only for replays. [However] this aspect of the game is the most important because during the competition judges impose a certain way of telling the story; they must see the style and also the psychological preparation of the athlete.

“The [style of the event coverage] was therefore characterised by a somewhat functional and ‘repetitive’ style, [but it was nonetheless a strong show thanks to the] great dynamism of the event itself.”

The resulting coverage was broadcast on Eurosport and RAI Sport, and was well-received by viewers.