Deltatre and the ongoing convergence of media platforms 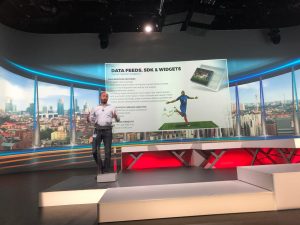 SVG Europe spoke to Roberto Sciarretta, Deltatre business development director, to find out his thoughts about the primary trends in TV graphics, remote production, IP workflows, and – the word of the moment – convergence…

“Inside the broadcast domain, Deltatre provides official TV graphics for international sport events using the latest generation of MAGMA, its Graphic Engine that was completely re-developed for the recent World Cup. The engine supports native 4K in the formats 1080p, 1080i, UltraHD SDR, UHD and HDR.

“Some new features introduced in TV graphics include the goal trajectory in real-time with the integration of tracking data, providing the experience of a virtual camera, such as a spider-cam. Technologically speaking, MAGMA was developed using Unity, a 3D engine used in the gaming industry.

“In Deltatre, although the content is extremely important, it is equally important to identify the correct distribution channels. This is particularly important with the new generation of users that are used to consuming the content with an increasing variety of different devices.

“This challenge has been addressed by the market with two different approaches. One way is enabling the ability to serve online channels simply by adding new features in parallel to the already existing systems. The benefit is a faster time to market, but the main drawback is that some technological [restrictions] from the legacy system [may not be overcome]. Another direct consequence is the inevitable duplication of [capabilities] with a consequent [increase in] overall complexity; as well as not being cost-effective, [this also raises the possibility of inconsistencies between the different systems].

“Deltatre’s approach is much more radical. The MAGMA 3D solution, previously [intended] for the broadcast domain only, has been completely re-engineered and merged with Unity in order to natively support any new emerging channel. This means that today, with a minimum effort, a television broadcast can be easily distributed through OTT channels with dedicated graphics [and the opportunity to adapt to different devices], such as mobile phones,” notes Sciarretta.

With the Work Cup in Moscow, Deltatre contributed to the remote operation of elements of the broadcast production. In addition to the centralisation of the unilateral and infotainment services at the IBC, part of the on-location production of matches was moved to the Deltatre Operation Center in Turin.

The advantage of this kind of approach is a considerable reduction in cost and logistical complexity, but with an increase in the quality of the services provided. An operator within his or her shift can follow more events, and typically the processes at the HQ are more robust with the benefit of greater flexibility.

Another example is ATP with Tennis TV, where the production is remotely based in London. Data is collected by the on-site referees, while the graphics are produced remotely.

UEFA, during the U17 in Poland in 2017, has been able to test a remote production workflow with six cameras from the stadium through a fiber connection at 100Gb, thereby realising an uncompressed transmission in 4K with a minimal latency around 36ms.

In the Deltatre strategy, notes Sciarretta, the remote production is considered only a transition (even if still fundamental) in order to reach a larger objective for the market that they call ‘convergence’, i.e. the possibility of merging the broadcast and the online domains in order to provide the maximum ‘exploitation’ of the content, removing any barrier typical to the two fields.

“The first fundamental step is the full adoption of the IP workflow in replacement of the traditional SDI one. This should happen in two intermediate stages: first, the communication among the venues through fast fibre connections; and second, with the wiring of the arenas in order to make the whole infrastructure adaptable to any kind of event.”

Currently, telecommunications costs to support broadcast quality are still relatively high. For this reason, the second fundamental step will be the virtualisation of the production in order to mitigate the overall costs. This does not necessarily mean an exclusive use of the public clouds (Amazon, Microsoft, Google, etc); instead, a hybrid model based on a mix of private and public clouds is more probable
Sciarretta says: “At Deltatre convergence will make it possible, through IP workflow and virtualization, to provide the content in real-time at low cost in a way that can be adapted to any channel.”

Financial models will shift from CAPEX to OPEX, enabling the market to unlock both the budget capacity and the technological innovations that are currently taking place. Hence, the new platforms will be ‘future ready’ and will easily integrate with emerging technologies such as Artificial Intelligence.

These developments will open up new horizons in terms of monetisation, including a transition from today’s programmatic advertising model towards the addressable/responsive one that is already frequently encountered in the online world.