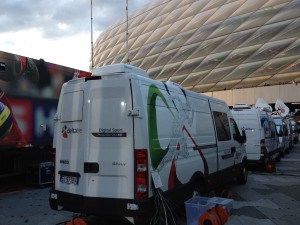 Sony and deltatre have rolled out 16 fourth-generation OB units during the past year to better meet the needs of deltatre clients.

Sixteen fourth-generation OB units have hit the road courtesy of deltatre, the Turin-based provider of graphics and data services to sport broadcasters across Europe. The OB vans were built in conjunction with Sony Broadcast Italy and Sony’s staff in Basingstoke. At the heart of each unit are six monitors with multi-viewers and Evert 3G routers. Six Deltatre graphics servers are also on board.

Carlo Lisa, director of Sales & Business Development, of deltatre, says the units are dedicated to graphics and data handling on major European sports events and Italian soccer with all data gathering from the venues processed and then redistributed to different media outlets and platforms.

The heart of the OB vans is a multi-view wall with six monitors and a 3G-capable Evertz Matrix router that measures 64×64 inputs and outputs and is upgradable to 64×128 plus six graphic servers outfitted with Nvidia graphics engines that build the 2D and 3D graphics with deltatre’s proprietary software.

The goal is to allow for all signals and data, typically captured by optical tracking systems as well as “spotters” placed in the grandstand who track penalties, corner kicks, goals, and more, to be better tailored to the needs of the promoter of the event and broadcasters.

For example, graphics created in English for the “multilateral” feed can be simultaneously built on a frame-accurate basis in German and Italian for respective visiting broadcasters who may need a unilateral feed for their home viewing audience.

The output can also be delivered within the stadium to video scoreboards, VIP “hospitality lounges,” and the media area for journalists.

All live video streaming from the OB units in the field are received in Turin via satellite links and then ingested and encoded and brought together with other IP data from the OB-vans. Deltare’s Diva Player then takes care of managing and distributing the content out to deltatre’s Internet platform clients.

Another important service the OB vans supply is called “Live Player Tracking.” Optical tracking cameras follow all of the players, the ball, and officials and track their locations (the x, y, and z axes) 25 times per second. An appropriate algorithm then matches the data and generates high-level statistic surveys like top speed, total distance covered in kilometers, average speed, mileage covered in “sprint,” “jogging,” or “walk” modes, and more.