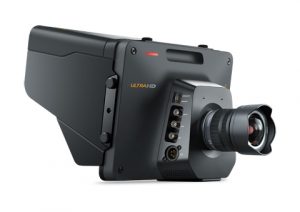 Led by head of broadcast, Matt Reeder, and chief technology officer, Stuart Fisher, DCFC has taken the decision and become one of the first Championship clubs to broadcast its own coverage of its English Football League (EFL) fixtures, as well as a wide range of pre and post-match content via the club’s streaming platform, RamsTV.

The solution has been developed with Blackmagic Design infrastructure products at its core by broadcast consultant, Stvdio Expert’s Peter Knowles. “Derby County has a unique vision of where the club wants to be in terms of delivering high-quality content to its 300,000 fans across the globe,” he said. “The wider brief set by Matt and Stuart was incredibly ambitious – to put in place the facilities required to produce content that would rival that of the major broadcasters.”

In covering home matches, DCFC currently relies on eleven camera channels, and according to Knowles this continues to grow and evolve. “Derby now has a dedicated studio setup where it can pre-record presenter links using three 4K studio cameras from Blackmagic Design. We then have a further two cameras on the main gantry at the halfway point and an URSA Mini 4.6K as a remote touchline unit, which is also used for pre and post-match interviews.

“We have radio receivers on the touchline and at the stadium entrance for the teams’ arrival, giving us greater flexibility as to what we can film and where. That is complemented by a Micro Studio Camera 4K as a locked off, wide-angle tunnel camera, which captures the pre-match lineup and preparations,” said Knowles.

The entire install relies on a single mode 24 core optical fibre network, with a Smart Videohub 40×40 for signal management throughout Pride Park Stadium.

“Our video matrix forms a very flexible foundation for the club’s production needs, particularly in these first few months as we bed in the new systems,” he continues. “It will be used extensively by the creative team to bring in new inputs and sources and affords Derby enough flexibility to continue experimenting with the scale and variety. As well as the eleven camera channels, we also have extensive slow motion and replay facilities, together with purpose-built graphics for match analysis.”

“DCFC’s vision is to deliver a more dynamic and engaging stream for its supporters, emulating the very best in sports broadcasting. The key to achieving that has been to select the very best production hardware possible,” concluded Knowles. “Delivering a solution designed around Blackmagic Design ensures the club’s editorial team is able to capture every pass and tackle while also ensuring the production values are world class.” 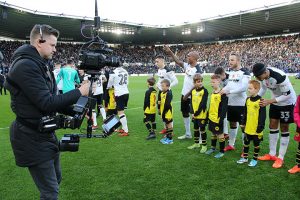 Derby is using StreamAMG, the online video specialist, for distribution of RamsTV for 2017-18 onwards having opted out of the EFL’s league-wide digital streaming service, iFollow. Other Championship clubs to have opted out include Aston Villa, Birmingham City, Bristol City, Fulham, Hull City, Middlesbrough, Queens Park Rangers, Sunderland and Wolverhampton Wanderers.

DCFC chairman Mel Morris, speaking at the beginning of the season, said: “We opted out of the EFL’s Digital iFollow agreement because we wanted to go much further and much faster in offering a streaming service that provided a capability beyond what the EFL project could deliver, given its relatively modest budget dictated by the need to support clubs in all three leagues. We are aiming for a much richer experience for our supporters.”

Live coverage of DCFC first team fixtures is only available to non-UK subscribers.