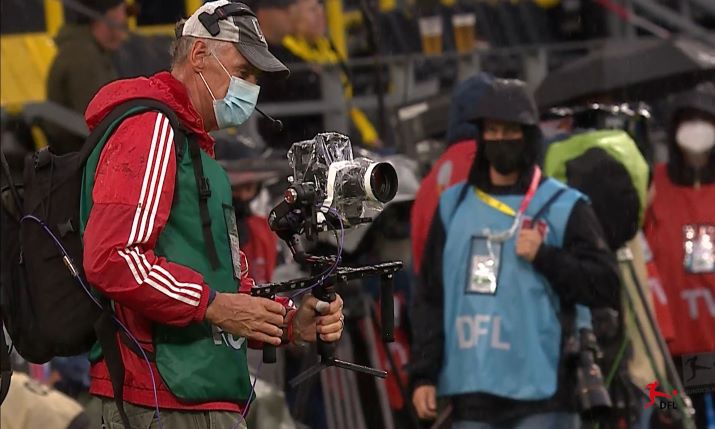 The DFL used handheld cameras for a cinematic look and feel at this year’s Supercup Picture: DFL/Getty Images/Boris Streubel

The enhanced broadcast featured the ‘Top Match Plus’ concept with a total of 26 cameras including a drone, an aerial camera system and corner flag cameras was upgraded with various special cameras.

A compact wireless handheld camera, including a cinematic look upgrade, saw action for the first time. Because of the camera’s shallow depth of field, the foreground and background of the image are clearly distinct from each other. This creates a cinematic look that provides a clear focus on certain players and objects.

In addition, the railcam was installed around four metres from the edge of the pitch between the manager’s bench and the corner flag. This can accelerate to speeds of five metres per second on a 30-metre rail, and allows low-angle shots, reverse tracking shots and dynamic images by moving in parallel with the players. One operator directs the camera’s movements (panning and tilting, zooming in and out), while another controls the dolly’s motion along the track. 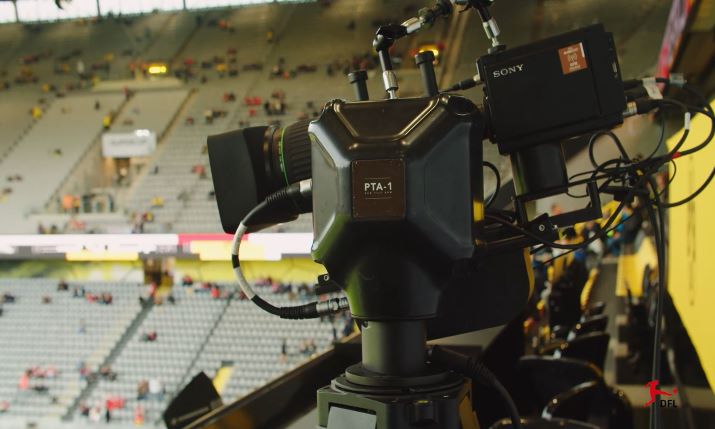 The automatically manoeuvrable star cam was used by the DFL for Supercup 2021 Picture: DFL/Getty Images/Boris Streubel

Outside of base signal production, a fully manoeuvrable mini drone was also used for the first time which, thanks to its compactness and manoeuvrability, allowed shots in the changing rooms and indoor areas of the stadium.

In addition, one star cam each was permanently installed in the stadium for the national and the international media partners. The star cam is an automatically manoeuvrable camera that focuses on individual players and follows them around the entire pitch on the basis of live tracking data. In Germany, the signal was streamed live and continuously online on broadcasters ran and Sky.

The Supercup 2021 was also produced as an independent production in 9:16 aspect ratio. A total of nine cameras and a separate video production unit were used for this, making it the world’s biggest 9:16 production in professional football. The signal was broadcast on the ran TikTok channel in Germany, as well as the OneFootball TikTok channel in Brazil. Via its own app, Sky Sports also offered its customers in the UK and Ireland the opportunity to watch the match in a format optimised for mobile applications.

Alexander Günther, managing director of DFL subsidiary Sportcast, explained the extensive use of a wide range of camera systems: “We want to use technical advancements to make media production fit for the future while also continuing to delight the fans.”