Sports broadcasting is changing. New entrants are putting pressure on traditional broadcasters, rights holders are bypassing broadcasters to engage fans directly, and public service broadcasters are having to re-think how they attract viewers.

It’s challenging, but this transformation also offers opportunities, according to a panel session at last week’s BVE conference in London entitled ‘A new breed of broadcaster’.

“The whole industry is changing. It is all about disruption,” said session chairman Keshav Nagaraja, client partner at Cognizant.

“The rights holders want to monetise their assets, but also, increasingly, they want to build direct engagement with their fans,” while the traditional broadcasters are having to react to competition from new entrants into the market, such as Google, Facebook, Amazon and Netflix, companies that now see sports as a great way to attract and retain their customers, he explained.

He cited research into how people watch the top leagues in England, France, Germany, Italy and Spain, which found that only the 50+ age group watches more on TV than online or mobile (with 61% TV compared to 28% other devices), whereas in the 20-34 age group those figures are 14% vs 38%, while the 35-49 demographic was 22% vs 27% respectively. 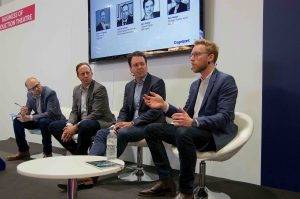 Children and teenagers watch hardly any football, with 3% viewing it on TV and only 7% online. This is partly why the PWC Sports Survey 2018 found that the number one threat is the “shift in consumer behaviour of younger generations”, with 71.8% of sports rights holders worried about it. The rights holders also believe that digital media rights will be the biggest growth area over the next three to five years.

The UK is still relatively traditional in how viewers watch sports, with 48% watching on free-to-air TV, 30% viewing subscription channels, with social media and the official sports websites tied at 12% each. In the US, however, the sports website is now the primary destination, with 23%, followed by 20% on social media, and both the official app and pay TV coming in at 15%.

From a rights holder’s perspective, the move away from the TV set could be a good thing. “There is an opportunity around how to engage more directly with the fans of the game, and how we build that relationship,” said Russel James, the Football Association’s digital engagement director.

Sports broadcasting “keeps being disrupted, and we keep having to respond to it,” added Ben Gallop, head of digital, BBC Sport. The challenges are always there, but as long as broadcasters focus really hard on what the audience wants then he believes there is still a place for public service broadcasting.

“The amount of money that’s being spent securing premium sports rights is making it very difficult to make a return on that investment” in the OTT space, said Ben Napier, strategic partner lead, Broadcast & Sport, Google, which is why he is seeing more and more content providers wanting to combine subscription with its ads. Google now works with both broadcasters and rights holders to help them monetise their content on both their own platforms and on YouTube.

When this involves targeted ads “that just adds another layer of complexity,” he said. “One of the things we are focused on at the moment is ensuring that ad space is as seamless as possible,” using its dynamic ad insertion technology, so as not to annoy the fans. However, delivering the same polished experience people are used to on their TV sets can be challenging online.

BBC stumps up for cricket

The disruption caused by digital has helped BBC TV to regain cricket coverage next year after 20 years, including 15 years exclusively on Sky. This follows a deal two years ago with the English and Wales Cricket Board to provide digital clips of test matches, which showed how much demand there was for free coverage and that the BBC could get high audience figures on new platforms.

This has since lead to a deal with the ECB and Sky (as lead broadcaster) and the BBC (offering highlights of every test England plays). The agreement includes ten live matches in a new 100-ball series, an eight-team city-based competition that is particularly aimed at winning younger audiences, something the BBC has demonstrated it can do.

Reaching a younger audience is also a key goal for the FA. For the 2018 World Cup it tried several different things to connect to young fans, including announcing the squad using young influencers on social media. Because it didn’t have any match rights, it had to devise a different way of connecting fans in the UK with players in Russia.

“We came up with a concept called the Lion’s Den, distributed on YouTube as a daily show,” said James. It did 31 episodes – more than it expected as England got to the third place playoff, which bust the budget, although it was a big success.

“If you think about the business models of companies like Amazon and Facebook, they tend to be different as well in terms of why they are buying sports rights,” said Napier. Neither need necessarily make a return on the rights themselves, but gain from other business they drive on their platforms. Google, however, sees itself “very much as a partner for existing broadcasters and rights holders,” whether through use of its cloud platform for production or via broadcasters’ access to the younger demographics that prefer to watch on YouTube rather than traditional TV.

He believes that this can be particularly useful for subscription TV, where new audiences wouldn’t otherwise see the event, and can then persuade some of those to subscribe. For example, BT Sport uses YouTube, where it had some 6million views in 2018, and can capture viewer lists for marketing, to target people who viewed the live stream with messages about subscribing for the upcoming season. “They’ve seen some great business results after doing that,” said Napier.

Google isn’t currently looking to buy its own premium sports rights, as Napier doesn’t feel it is possible for it to make money on it by simply selling ads against the content. Besides, “we are already able to show some premium sports, although non exclusively, through partnerships,” such as with BT Sport. “As soon as we start competing against [these broadcast partners] for premium sports rights it makes those relationships much more challenging. We might secure a great piece of content that drives a huge audience to our platform, but what kind of damage would that do to the existing relationships we’ve got?”

It’s not all about money for the FA either as a non-profit making organisation. Its major aim is to drive “the love of the game”, by getting more people playing football, particularly among women, where it aims to double the numbers both playing and watching women’s soccer. “OTT and other digital technologies help us take that sport from actually being quite a niche sport to, we hope in time, being a mass participation sport,” said James.

It is also not a matter of just having great content, he added, you also need the ability to build on that engagement with fans, to attract them to joining or supporting a club, or joining the England supporter’s club.

The next big challenge for BBC Sport is “how to take iPlayer from being very much a catch-up service to one that really does differentiate itself from the likes of Netflix by being a live destination for sport,” said Gallop. To do this it will have to makeover the brand as a live sports service and also address the technical challenges of scaling to deliver the huge number of live streams for major events, although as the BBC has been streaming sports since the Athens Olympics, he is confident that it can meet those challenges.

“I think the value of VR is more to do with immersive experiences around the edges of the live experience” – Ben Napier, Google

For the World Cup last year it delivered up to 2m streams for a match, although still only a small proportion of the many millions watching on linear TV. However, he believes that streaming will eventually become the main way consumers view sports.

The BBC’s next big investment will be in Ultra HD, but it is also “placing small bets” on other new technologies. At the World Cup, it worked with FIFA on a VR app. “We had about half a million downloads of that app and it was really successful.” Although they gathered a lot of useful data about how people used VR, it is not a technology that will move beyond a research brief anytime soon.

Google is also working on AR and VR content, something it did with BT Sport for the Champions League Final, and is “very much driven by what the broadcasters want to do,” said Napier. “I’m not convinced we’re going to see VR consumption of whole live sporting events any time soon. I think the value of VR is more to do with immersive experiences around the edges of the live experience,” such as access to changing rooms before the match or at half time, or the huddle before a shootout. Augmented reality is an easier add on, to let fans overlay stats on what they are seeing.

“We’re seeing this explosion of data, but the big challenge becomes ‘how do you present it to the audience’,” especially as you might want to keep things simple for general viewers, but hardcore fans want a lot more detail. “We’re seeing more examples of sports organisations testing different ways of presenting it,” said Napier. Formula One is a great example, with F1 TV, which offers its fans a great deal of data that they can customise to see just what they want. He thinks we will see more of that, particularly in the OTT space, where apps are being built for hardcore fans who want to view vast amounts of data.

This data flows both ways. As the FA moves from just dealing with clubs and broadcasters to being more consumer focused, and in the five years since James joined the FA it has moved from having just one person doing customer insight analysis to 12.

Now that iPlayer requires users to sign in, the BBC has started to learn a lot more about its audience, added Gallop, which is allowing it to also start offering personalisation and to devise content aimed at particular audiences, especially for younger age groups.

Ultimately, Napier advises anyone going into this market to: “test everything. See what works. Don’t use essentially the same content on every platform. Use the analytics you can get on each individual platform to understand how your audience is consuming your content. Make changes and ultimately find out what’s going to work for you, because it will be a unique mix for every company. But, the only way you’re going to find out what works and what doesn’t is by testing.”