Digital disruption enables the next generation of ‘broadcasting’ for Lagardère Sports

Due to digitisation and advances in technology the lines between traditional broadcasting and digital media are blurring. As a key player in the changing landscape, Lagardère Sports is enabling rights holders and sponsors to create innovative media events.

Digitisation offers the possibility for market players to launch their own media platform as Lagardère Sports proved by enabling DKB Bank, the main sponsor of Germany’s Handball Bundesliga, to offer live sports streaming. The exclusive live streams of the 2017 IHF World Men’s Handball Championship on the DKB Bank platform marks the first time that a sponsor has acquired the transmission rights for a huge sports event when the negotiations with German broadcasters failed.

This new possibility offers great potential for sponsors and other sports partners. With the acquisition of a German broadcast license for live streaming of sports events, Lagardère Sports accomplished the legal framework. But there are neither plans to launch a 24/7 program nor to extend its existing business model.

After having brokered the streaming rights for the Handball World Championship 2017 in the German market with the sponsor DKB, Lagardère Sports continues to lead in innovative media distribution. In 2017, the company signed an exclusive UK media rights deal with diving superstar and Olympic medallist Tom Daley. By providing a live stream of the FINA World Series 2017 events to his YouTube channel, all the action was brought straight to fans. “Live streaming on social media is becoming increasingly popular and by using our expertise, we can transfer our skills and knowledge to modern forms of broadcasting,“ says Nikolaus von Doetinchem, Vice President, Media – Europe, Lagardère Sports.

With more and more audiences consuming sports via different channels, Lagardère Sports is launching more collaboration and creating unique ways to broadcast live events. Lately, Lagardère teamed with David Goffin’s Octagon and Dutch drinks manufacturer AA Drinks so that the matches of the Belgian tennis star at the ATP250 Tournament in Montpellier were broadcast live and exclusively on his Facebook page in his home country.

“We believe this is an innovative marketing tool for both brands and athletes to engage with the fan base,“ says Karine Molinari, Player Manager at Octagon. Adds von Doetinchem: “this project highlights our objectives in the field of branded content and underlines the growing impact of athletes as media platforms within the current transformation of the media landscape.“ 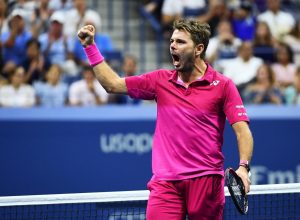 Stan Wawrinka’s matches from the recent ATP tournament in Marseille were streamed live to his Facebook page for his followers in Switzerland, the Netherlands, Belgium and Luxembourg

Thanks to the new collaboration of railway company TGV Lyria and triple Grand Slam tennis champion Stan Wawrinka, his matches from the recent ATP tournament in Marseille (February 19-25) were streamed live to his Facebook page for his followers in Switzerland, the Netherlands, Belgium and Luxembourg. This was the first time the current French Open finalist and his partners have provided such a unique experience for his fans.

This partnership has been backed by Lagardère Sports, the official distributor of broadcasting rights for the event in Marseille. “Digital disruption is moving forward and we believe in athletes and their platforms as an important part within the media landscape. To stream such events on social platforms of the athlete allows us to bring the sport closer to those who seek for content about their sport and stars: the fans,” underlines von Doetinchem.

“Following the project with David Goffin, we are proud to cooperate with such a world-class athlete and multiple Grand Slam winner like Stan Wawrinka, showcasing that we are taking the right path into the next generation of sports broadcasting.”