Digital driveway for the data highways: Constantin Medien and Plazamedia create a media hub for Germany 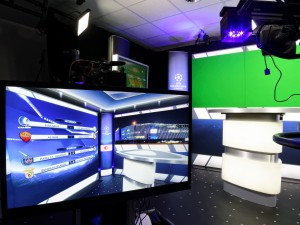 This image from Plazamedia highlights the virtual extension of the ZDF sports studio.

The German corporation Constantin Medien and its affiliated company Plazamedia are partnering with global communications leader Tata Communications. Together with the Indian network service provider, the German company plans to build a media hub for content distribution, management, storage and data processing in Germany, Austria and Switzerland.

As a leading content solution provider and TV producer, Plazamedia will use the media hub to deliver material to its customers. Thanks to its Video Connect network that links more than 240 countries and regions via an underseas fibre optic network, Tata Communications can deliver live videos all across the world. In order to manage the increasing amount of content in the media business, the new media hub will use Tata Communications’ IZO Private Cloud und IZO Cloud Storage. Due to the increasing requirements for data protection, Tata Communications will set up an IZO Private Cloud Hub in Munich. Additionally, the company is going to build a new connectivity hub at Plazamedia’s site in Ismaning.

“Plazamedia is becoming the digital driveway for the data highways all across the world,” states Fred Kogel, chairman, Constantin Medien. “This enables us to access the highly advanced connectivity and data centre for consisting and coming media customers in Germany, Austria and Switzerland. Our agreement with Tata Communications is a trend-setting milestone within the scope of the digital transformation of Plazamedia. Furthermore, this is also a step forward towards the repositioning of the Constantin Medien corporation into an innovative technology media centre.”

Focus on sports and more

As an international operating media company that is located in Ismaning near Munich, the corporation puts a focus on sports. But due to the participation of Swiss market-listed media company Highlight Communications, other segments include film, sport and event marketing. Most recently at Constantin Medien’s stockholder meeting at the beginning of November, the chairman and the supervisory board agreed on a strategic repositioning of the media corporation. The declared goals are to slim down the corporate structure and improve the financial structure of Constantin Medien.

But during the voting process the stockholders who own about 30 percent of the capital stock were excluded by the chair of the meeting because they had formed a voting rights group. Due to these developments, Highlight Communications declared that they wouldn’t approve any of the decisions which were made at the stockholder meeting. The Swiss company announced its intention to take this case to court. Highlight Communications is considering Constantin Film as a key part of the business model and says it will prevent the planned divestiture of Constantin Medien.

In the first half-year of 2016, Constantin Medien had a turnover of €264m. €161.4m of the revenues were generated in the film division, while €75.6 related to sports and €26.8 to sport and event marketing. While the EBIT in the sports segment were €3.6m and €10.6m for sport and marketing, the economical key performance indicator of the film-related activities came down to a minus amount of €400,000.

The strategy to fully focus on the segments sport and sport marketing had already been outlined by Constanin Medien last September. “The repositioning as [a] sport-only enterprise is the best and most promising strategy for the media corporation [in] the long run,” states Fred Kogel, chairman, Constantin Medien. “This gives us the opportunity to increase strongly and permanently the profit on sales and profitability of our corporation.”