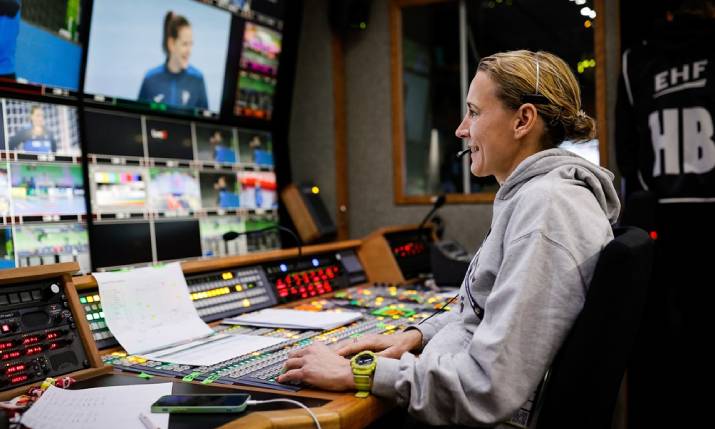 The final weekend of the Women’s EHF Euro 2022 saw a new broadcast record in handball, from behind the scenes. The broadcast crew, which was 50% female throughout the event, grew on the last weekend for the Final with more replay operators arriving, taking the female representation on the team to two-thirds.

The team was led by director Gudrun Wanek, who has been directing since 2012 after starting as a replay operator in 2004.

“The role of the TV director is basically to make sure that the viewers of the broadcast get to experience every aspect of the event taking place,” says Wanek. “I usually work in an OB van, where I am in front of a monitor wall, which displays all the sources available: cameras, slow-motion, replay outputs, TV graphics, picture-in-picture frames for video replay situations, and so on. I operate with a vision mixer, on which every button stands for a different source.”

At the final weekend of the EHF Euro 2022, which ended on Sunday 20 November, Wanek managed 20 cameras and 10 slow motion replay outputs, as well as six different picture-in-picture frames, plus more.

“You can sum it up as I push a lot of different buttons, talk and listen to a lot of people at the same time and, with all this crew effort, try to tell the story of the game as good as possible. It is a bit like being a team coach. You need all the others to deliver a good outcome. You are the guiding figure,” says Wanek.

To effectively guide so many people’s work in such a fast-paced setting, it helped for Wanek to be familiar with the different team members and they with her. Although the team that worked together for the final weekend of the EHF Euro 2022 had not done so in this exact arrangement before, Wanek has worked with all of them.

“I brought the replay crew because that is really crucial; they need to speak the same language. And ideally, they have worked with you before, because you have to be just so quick to bring something on the air that just happened a second before,” says Wanek.

The experienced members of the team have backgrounds working in many sports, including football, table tennis, ice hockey, basketball, American football and of course handball. Wanek also played handball and comes from what she describes as, “a handball family”. Wanek was a director at the Men’s EHF Euro 2022, handling the venue in Kosice.

Every broadcast day starts with a plan. “You think about what are the possible situations in a match and what do you want each camera to do. So, I have long production briefings before we start the first production day and I go through every camera and tell them what I want from them in every instance of the game. For example, the camera which is low on the court: when there’s a penalty, a seven metres, I want one camera to have a close-up of the player who throws and one camera for the close-up of the keeper.”

Aside from capturing the match action, there are reaction shots, coaches and the audience. It is important also to capture the emotions of the match; the joy, the disappointment, and so on. “I would not differentiate at all between men’s and women’s handball in terms of quality or speed or anything. In men’s handball, they are all like, super serious; mostly. The women, they are having a ton more fun. You see so many smiles and high fives and dancing to music and stuff like that when they start to warm up or before they come onto the court. I see more joy.

“When it comes to men’s and women’s handball, from a perspective of telling the story of the game, there is no difference. The only consideration is the size of the players, which can have a minor impact on some elements of the direction.

“I would not differentiate at all between men’s and women’s handball in terms of quality or speed or anything,” says Wanek, although she does find one different prior to the matches. “In men’s handball, they’re all like, super serious — mostly. The women, they are having a ton more fun. You see so many smiles and high fives and dancing to music and stuff like that when they start to warm up or before they come onto the court. I see more joy.”

Thinking of differences in men’s and women’s sport, Wanek says the way different athletes have often been presented in the media and by sports fans springs to mind. She says: “It seems clear that some sports photographers, journalists and TV directors focus more on players they deem attractive than others or on trying to highlight features of the athletes’ bodies.”

As to whether Wanek has seen that change during her career she says: “That is definitely something I pointed out to my camera operators as well,” says Wanek, discussing some different warm-up games teams might play or exercises they might do that would end up highlighting certain parts of their bodies if shown on TV, as well as particular moments during the matches. “That is also something which slowly changes. Many directors don’t show that anymore because it is inappropriate,” says Wanek.

Although this might be more of a consideration with female players, especially for a female director aiming to ensure positive change in terms of how women are presented and valued, it must also be taken into account for men. “That is something which is probably a certain awareness that is changing slowly,” says Wanek.

It is not only concerning the athletes where certain shots or focus on particular athletes because of the way they look can be an issue; that can also happen when it comes to the crowds at sporting events. This is problematic because it reinforces certain ideas of women and how they “should” look, as well as catering to a certain audience for sporting events, when the idea would ideally be to focus on athleticism and performance and nothing more.

“If you have crowd shots, or if you ask your camera operator to find people in a crowd, they usually pick the most perfect woman; many of them would pick the most beautiful woman they can find,” says Wanek, adding that FIFA have now included a need to avoid these kinds of choices in their production guidelines.

However, she adds on the subject: “It is obviously not something you are so aware of or brave enough to address when you hear it when you are like 16 or 20 or even 25 and just starting out in the business and especially if you are in such a male dominated business. It can become an everyday business and it kind of stings,” says Wanek, highlighting how so many women feel such comments as very hurtful. If nobody stands up to it, it is not going to change, if people can just keep behaving like that.

“It’s verbal violence. And I don’t want to work like that. I don’t want to work in the environment that supports that and that is why I am pretty much trying to address it whenever I encounter it and just be really vocal about it. For me it was a part of growing up, I guess: becoming more aware of language, fairness, equality.”

On how to get more young women into roles such as here, Wanek concludes: “I think it’s for one reason, which is some sort of mantra: ‘You can’t be what you can’t see’. If you don’t know that there are women in these roles, you would never, as a kid or girl, imagine yourself in a role,” says Wanek, who hopes things will continue to change rapidly and that in some years she will look back with a different view of her field.