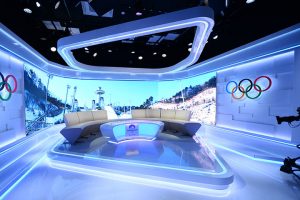 The Eurosport studio at the IBC during the Winter Olympics

A cloud-based MAM system developed for coverage of the Olympic Games was among the winners at the IABM’s inaugural Broadcast and Media awards (BaMs).

The NEP Group and Discovery Networks set-up was victorious in the ‘Project’ category where it was praised for its bravery.

The judges said: “Using a cloud-based solution as the MAM platform for one of the highest-profile broadcasting events such as the Olympic Games is a brave decision, and successfully utilising it to deliver all of the Olympic content to 50 territories in 21 languages is a great achievement.”

NEP’s Mediabank technology was at the heart of the workflow which was used in Pyeongchang during Eurosport’s coverage of the Winter Olympics to facilitate live MCR, ingest, craft editing of highlights, automated clip generation, storage of content, distribution of live content and clips, a signal hub, an audio matrix and 24/7 monitoring. It is said to have supported over 12,000 hours of Olympic content.

Other BaMs winners included NeuLion in the ‘Consume’ category for its Digital Platform Advanced Mobile Experience, and Vizrt in ‘Produce’ for its Viz Libero AR augmented reality sports analysis.

The latter was rewarded for “adding real excitement to studio coverage and tapping into the trend for AR to allow fans and presenters to analyse the plays and get closer to the action.”

The winners of IABM’s BaMS were announced at an Awards party on 10 April at NAB 2018. More than 100 entries were received across the 10 categories. The judging was carried out by a panel of more than 40 non-affiliated judges.