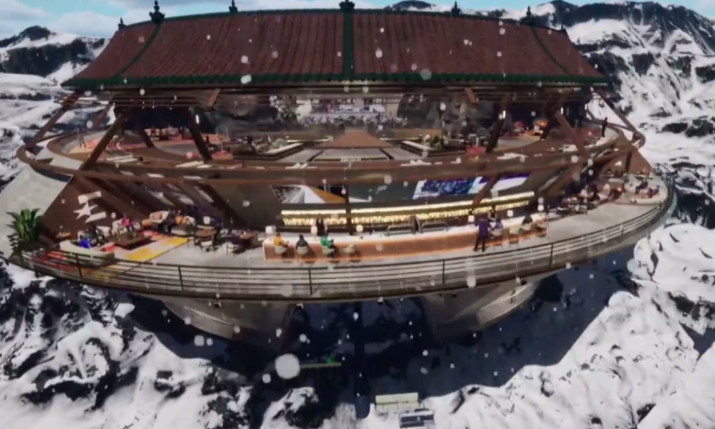 Discovery is all set to bring 50 countries and territories live coverage of the Beijing Winter Olympics next month using an enhanced Cube mixed reality studio and numerous workflow innovations that go over and above its technical achievements at Tokyo 2020.

The broadcaster will deliver 1,200 hours of live content for its linear and digital platforms, including discovery+, Eurosport and the Eurosport app, over the course of the Games, using a completely decentralised remote production model that has hubs all around Europe.

Although the Winter Games, with a maximum of 15 concurrent events happening as opposed to the Summer Games’ 39 simultaneous events, is significantly smaller than last year’s blockbuster, it is no simpler for Discovery to manage technically.

Speaking to SVG Europe, Simon Farnsworth, senior vice president of technology and operations at Discovery, explains: “I guess in theory [the Winter Games] should be simpler, but the way that the Olympics works is that technically at the back end it’s a bit more complex [in China] because in Tokyo, we had one IBC, [whereas] in Beijing, we’ve got two. We’ve got the mountains IBC and we’ll have the Beijing IBC, which really covers what I would call the ice events, so your figure skating. Coordinating all the circuits across all the two different sites makes it more complex by nature.

“But what we did – which I think was smart – is we are using exactly the same technical IP set up that we used in Tokyo for Beijing,” he goes on. “The same equipment got shipped, because we just simply couldn’t pull all the equipment back to Europe and then send it all again and have everything ready in time; just the sea freight times alone wouldn’t allow us to do that. So in terms of the set up time, it’s much, much quicker in Beijing, because we had it all configured ready for Tokyo. We’re just essentially a bit more plug and play.”

“Beijing will be the first time that we’ll have everybody on that central editing platform, which is huge for us in terms of searchability of content and distribution of content”

Farnsworth adds: “The Olympic Games by its very nature is extremely complicated as you have a large number of simultaneous sports going on at any one time. For Beijing, the biggest day will have 15 simultaneous events and when you’re broadcasting that across 19 different languages in 50 markets across Europe with 150 control rooms from Norway down to Madrid through those countries, you get complex pretty quick. So, there is an enormous amount of complexity across our network.” 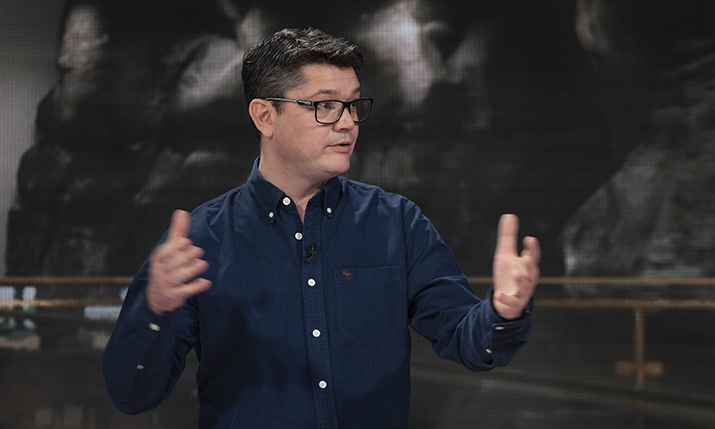 On how Beijing has evolved technically from Tokyo for Discovery, Farnworth says: “We’re certainly doing a lot more remote production, even more than we were doing in Tokyo. Lots more remote commentaries, lots more remote editing, than we’ve ever done before. And partly that’s driven by the technology, but more so the COVID restrictions that we’re facing.”

He goes on: “I don’t think we’re now going to have any live commentators in Beijing, whereas we actually did in Tokyo. I think we had probably up to about 40 commentators in Tokyo. So all of those people will be remote.

“We’ve now built essentially two commentary platforms in the cloud that does what we call auto mixing, so we don’t have an audio operator mixing any audio; we’ve simply got software using AI algorithms that level the software. So that’s been a big innovation for us.”

“We now have our overall WAN that we’ve built, which is bigger than Cisco’s WebEx network. So we’re at 400-gig connections to all of our main sites, so we can chuck an awful lot of data around that network”

Discovery has embraced a decentralised remote working model for around 1,000 people working behind the scenes on the Winter Olympics in Europe. Farnsworth explains: “We’ve got production control rooms in all our sites, not just [a single] production control room. So Oslo, Stockholm, Denmark, Copenhagen, Munich, Warsaw, Hilversum in the Netherlands, Paris, Madrid, Milan, and the UK; everywhere now it is remote production.

“When we built our infrastructure, it was all around the ethos of remote production, but all the equipment sits in two datacentres and then it just gets assigned to control surfaces in all the different markets. So one day we could have two PCRs in Madrid, [and the] next day, we could have three, or four, or five,” he adds.

The datacentres are Discovery built and owned, based in London, UK and Hilversum, the Netherlands, the latter of which was opened in March 2020 following a €40m investment to create a new technology hub. 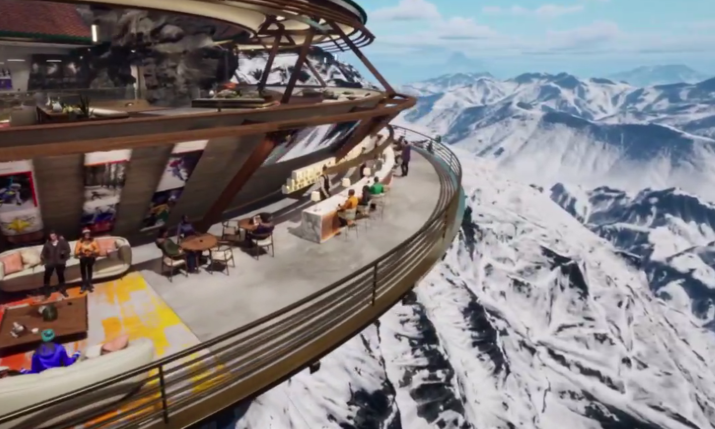 The Cube has evolved significantly from the version used in Tokyo. Bespoke avatars built to closely resemble athletes from specific winter disciplines will float in the Cube, so experts will be able to walk around them and analyse the minutiae of an athletes’ movements and performance in more detail than ever before

He adds that this Games marks the first time Discovery has been able to allow all its editors to work remotely across a centralised editing platform in the cloud, following digital investment that began in 2018. He explains: “Beijing will be the first time that we’ll have everybody on that central editing platform, which is huge for us in terms of searchability of content and distribution of content.

“We’ve now migrated all of our editors onto our central editing platforms so all the content that comes from Beijing and the studios all gets ingested into one central cloud-based post production platform that anybody who has a Discovery login can log into from home or from a Discovery site. [They can] edit content and then make that content available, either into a production control room, onto social media, as a replay for our playout system or for our digital.”

He adds that is a, “big, big move,” on from Tokyo. “We’ve been working super hard on that in the background.”

Onsite in Beijing Discovery has around 50 members of staff, which are mostly focusing on content capture. Farnworth notes: “So we still have quite a bit of venue capture, so the majority of those folks [onsite] will be ENG crews; video journalist crews at the venues capturing content. And then we’ve got a sizable presence in the IBC’s, which are our broadcast operation centres that are taking all that capture in and then rooting it back to the two datacentres. And then it gets distributed out from the two datacentres. So it’s a mix of engineers, IT and network people, operations folks, and then camera guys, sound guys, and everything that supports them.”

As to how this is possible, the broadcaster is constantly increasing the size of its wide area network (WAN). Farnsworth adds on Discovery’s infrastructure: “We’ve made huge improvements since 2018. We’ve been on a journey since PyeongChang to modernise Discovery and Eurosport’s infrastructure to allow us to move into a digital age and we’ve invested a huge amount of time modernising those control rooms. We now have central ingest points which allows all of our editors and production folks to ingest any piece of content. They can start editing and distribute to social media, digital platforms, linear platforms.”

Farnsworth says: “We now have our overall WAN that we’ve built, which is bigger than Cisco’s WebEx network. So we’re at 400-gig connections to all of our main sites, so we can chuck an awful lot of data around that network. And that’s connecting all our sites around Europe, as well as our sites in the US.

“It’s just constantly evolving and upgrading,” he continues. “We actually had that one in PyeongChang, but it was only maybe a 1GB to 10GB network, but now it’s just expanded enormously,” he notes, due to the sheer volume of content that Discovery is pumping through, as well as the standards being used.

Says Farnsworth: “We’re all using JPEG XS encoding, which is the lowest latency we possibly can get and it’s all IP, so we can route anything; we don’t have a router anymore. We just have an enormous database that routes IP connections to all these sites.” 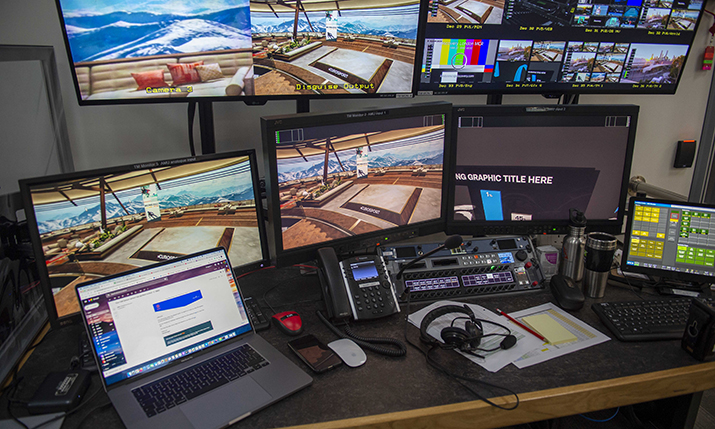 Behind the scenes of the Cube in action

Onto the Cube, which has also evolved significantly from the version used in Tokyo. Bespoke avatars built to closely resemble athletes from specific winter disciplines will float in the Cube, so experts will be able to walk around them and analyse the minutiae of an athletes’ movements and performance in more detail than ever before.

In addition, background avatars will populate the studio space, adding atmosphere and life to the environment, and will even be transported around the resort by a functioning ski lift.

Discovery has also implemented a further three greenscreen studios in Europe taking the total up to eight.

Farnsworth explains: “[The Cube has] got a totally brand new look and feel [and] we now have greenscreen studios all around Europe. Also, we’ve put new tracking systems in the Cube, which allows it to look even better than it was before. So in terms of the version, I think probably we’re on seven or eight, but every time we add a greenscreen studio, it gives us more functionality, particularly with the teleportation.

“We’ve seen with the Australian Open recently that we’ve got talent coming in from all around Europe and from Melbourne into the Cube so that we can have really cool two-way conversations.”

All the greenscreen studios for the Cube now use Mo-sys tracking software. This enables the increased number of studios to sync precisely, says Farnsworth. “We’ve completely implemented all the same tracking systems in our greenscreens around Europe so that we can all have the exact timing, the exact same data references, to allow us to do this, which is super cool.”

Ready for all challenges

Farnsworth is ready for whatever challenges the event throws at the team over the next few weeks but is ready for the logistical intricacies of putting on such a large event across the multitude of European markets that Discovery serves.

He says: “Stuff always crops up, but I’m sure the Chinese will put a great event on; if there’s no snow, they’ll create snow. The challenge for us is just the scale and the complexity of what we do, and no other broadcaster ever does it; we’ve got 19 different languages, 15 different events. If you multiply that up in terms of the volume of production associated to it, there is no other network in the world that probably does the scale that we do in terms of volumes and complexities of simultaneous feeds. So that’s the real challenge; making sure we’re properly coordinated around all of that.”

Next up after Beijing is a steady stream of sporting events over 2022 for Discovery. Farnworth concludes: “As soon as we finish Beijing, we’ll be into fast-follows of Roland-Garros, Giro d’Italia, and all those large events that are using all this infrastructure, as well as our host broadcasting rights in the Nordics with the Allsvenskan [the Swedish top tier football league] and Superliga in Denmark. So this stuff’s getting used all the time on a major scale; our big events calendar just never stops, really.”

The 2022 Winter Olympics will begin in Beijing on Friday 4 February and continue until Sunday 20 February.