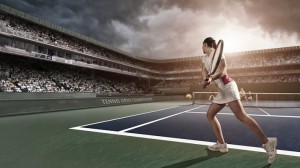 “DMI has employed two HD OB trucks for sports and event production for a few years,” says Saleh Lootah, chief technology officer for DMI. “The Dubai Duty Free Tennis Championships, however, was the first time we made an attempt to go into surround sound production. We chose the SoundField DSF-B system for the job as part of a product evaluation that went very well. We simply used the SoundField signal mixed with commentary as the sonic bed for the show, adding in a few well-placed effect microphones. The sound quality was excellent and we had no phase issues whatsoever upon metering.”

The single DSF-2 microphone feed was suitable for producing the entire programme along with commentary and some heightened effect microphone feeds. The DSF-2 microphone was placed to the side of the centre court line to capture the excitement of the match action, while delivering the sonic experience of the stadium into the home.

“When the SoundField stereo signal was compared against an actual dedicated stereo recording of the event, the SoundField stereo was deemed suitable for non-surround transmission as well,” states Lootah. “To be able to capture the entire event and output both surround and stereo from one source is a remarkable efficiency for the engineering staff.”

The DSF-2 microphone and DSF-2 microphone controller/preamp combination outputs stereo, M/S and SoundField’s exclusive four-channel, B-Format audio. The DSF-3 Digital Surround Processor takes the B-Format signal information to output into any current surround format, delivering a phase-coherent signal that won’t suffer from the upmix/downmix process. The system was particularly suitable for DMI because the DSF-2 microphone can be situated up to a distance of 1.25km (.75 mi) from the truck without any signal degradation. In addition, the stereo signal may be output directly in both analogue and digital to accommodate any broadcasting situation.