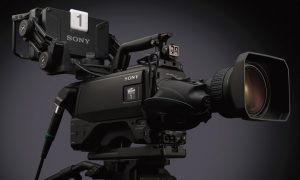 Salford-based Dock10 has bought 15 Sony HDC-3500 4K cameras as it looks to futureproof its infrastructure for increased 4K UHD output.

The purchase, made through Sony Specialist Dealer ES Broadcast, forms part of a £5m technology investment plan to upgrade Dock10 studios, post-production facilities, media storage platforms and the network that supports MediaCityUK, where it is based.

Dock10’s facilities are used to make a number of high-profile programmes including BBC Sport’s Premier League highlights show Match of the Day.

It has a 2/3-inch 4K CMOS sensor with global shutter technology and is said to “empower broadcast and production facilities to deliver image quality in 4K at low noise, high sensitivity and HDR.”

The Sony cameras were chosen after a rigorous head-to-head assessment process and won because of their picture quality, format flexibility and imaging power.

They will complement the existing suite of SonyBVM-HX310 series monitors used across the Dock10 post-production and edit suites.

Commenting on the investment, John O’Shaunessy, head of technology operations at Dock10, said: “In the seven years since we opened Dock10, we have grown into a thriving creative community and powerful regional cluster. Innovative technology has always been part of the fabric of our business and we continue to invest in solutions that will help our customers to explore new creative and commercial opportunities. We share with Sony a mutual commitment to empowering content creators to unleash their potential and our investment in cutting-edge UHD technologies will help our customers explore the latest possibilities in programme-making.”

Commented Norbert Paquet, head of product development at Sony Professional: “We’re continuing to see a significant uptick in demand for 4K UHD, HDR and IP, as the production community looks to untap operational efficiency and ROI. Dock10 sits at the epicentre of UK production and is a prime example of a company investing strategically in forward-proofed solutions that will help drive value for its clients, both today and in the future. With this further investment in our flagship system cameras, the company is sending a very powerful message that it is ready to support customers as they transition to UHD HDR.”

Benjamin Murphy, managing director of ES Broadcast added: “We are delighted that Dock10 are making this significant investment in UHD technology. ES Broadcast has worked closely with Sony and Dock10 over the last 12 months or more to help them expand their UHD broadcast offering, so it is gratifying to see their diligence bear fruit.”

Based at the heart of MediaCityUK in Salford, Greater Manchester, Dock10’s studios and post-production services are the home to ITV entertainment show The Voice and the BBC’s Question of Sport. They are also used to make commercials and corporate films for leading brands.