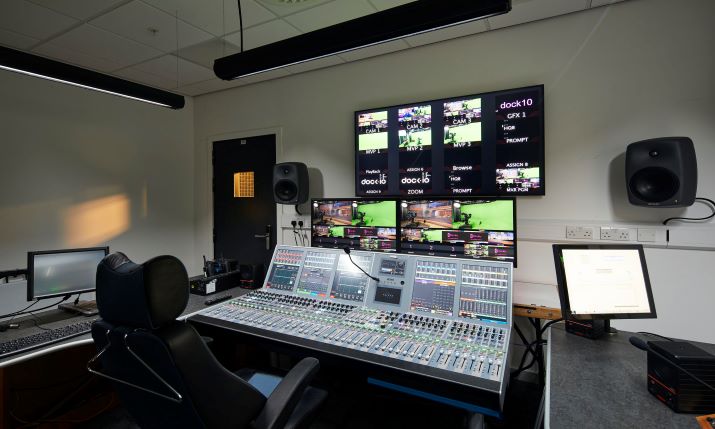 Television facility dock10 has expanded its roster of Calrec audio consoles with the addition of an Artemis desk in its new £1 million remote gallery.

The multipurpose gallery was designed to complement OB providers’ services and connects to the dock10 network, which has more than 20 dedicated service providers. It is adjacent to dock10’s HQ8 television studio, which has been upgraded as a dedicated virtual studio space. This is the eighth console from Calrec that dock10 owns, all of which are connected to a Hydra2 network.

John O Shaughnessy, head of technology operations at dock10, said: “We have all seen the massive growth in remote productions, for well-documented reasons, and this is only going to grow. Our aim is to support OB providers rather than compete with them. Some of our key OB suppliers already use Calrec’s remote production RP1 technology and it was essential that we support those workflows. Over Hydra2 the Artemis can easily access any I/O in any other studio in our facility, as we can with the other existing Calrec consoles. This flexibility is essential.”

Recent projects that were delivered from the new gallery space include the FA Cup Final and the Premier League. Other projects include recording and broadcasting live events around MediaCityUK, including the piazza, which is regularly used for live shows and events such as Blue Peter and Sport Relief.

Anthony Harrison, sales manager at Calrec, said: “It’s always fantastic to see a major customer like dock10 expanding the use of our technology. Remote production has grown exponentially over the past year, though of course we were already very active in that space. Broadcasters have had to invent new ways of making content and live events happen and dock10’s new gallery space is a great example of this innovation. We are pleased to be supporting this growth.”