Doha 2019: Inside the IAAF World Athletics Championships with IAAF Productions

With teams readying themselves for the biennial IAAF World Athletics Championships 2019, IAAF Productions is in full preparation for the seventeenth edition of the Championships, scheduled to be held between 27 September and 6 October 2019 in Doha, Qatar.

IAAF Productions is a joint venture that commenced operations in January 2018 between the International Association of Athletics Federations (IAAF) and ITN Productions for host broadcasting and media production of IAAF events. This Championships is the highlight of the joint venture to date.

On IAAF Production’s strategy for producing the broadcast content for this prestigious event, Alastair Waddington, general manager at IAAF Productions, told SVG Europe: “Our watchwords are innovation and storytelling. Doha will break new ground: midnight marathons complete with a one-kilometre wirecam; a fully produced Super Integrated Feed aimed at younger viewers; use of virtual graphics in our storytelling; improved integration with event presentation. These will be the largest and most ambitious World Championships production: more feeds, preview shows, up-close access to athletes and data-driven.”

The stadium for the prestigious event, the Khalifa International Stadium, was renovated in 2017 and is home to the Qatar national football team, nicknamed ‘The Maroons’. Khalifa Stadium is a well-established centre of sport, having hosted the Asian Games in 2006, and it is set to be a World Cup venue in 2022.

Speciality equipment being used for the event abounds. IAAF Productions’ one kilometre-long wirecam is of particular interest, as well as drones that will be used on outside races (no helicopters).

There will be UHD-HDR in use, as well as Hawkeye, Bodycam on officials, rail cam backstage, more cameras behind scenes and in athlete warm-up areas, speed data and newly developed speciality cameras, and RF SSM

In total there will be over 100 HD cameras set up in the Khalifa Stadium and a further 23 UHD cameras on the outside races on the Corniche. The feed is getting back to the compound via IP over fibre. 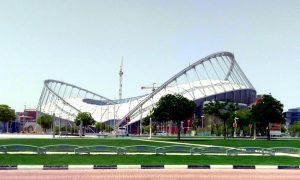 The challenges in producing the athletics in Doha are numerous, but the team is experienced in working in this region, said Waddington: “There are logistical and cultural challenges which require some thinking on our toes and a joined-up strategy with the LOC. Many of us have worked in Doha and Qatar before so very little is new to us and nothing is insurmountable!”

He went on: “It doesn’t matter where we are in the world, there are always cultural differences and challenges which need to be handled sensitively and appropriately. We have a high percentage of women in our core team and have faced no specific issues relating to operating in Qatar.”

Overall, the main challenges the team is facing in producing the broadcasting for the event, is said Waddington, “location, climate, heat!”.

There are a couple of broadcasting highlights at this event, Waddington stated: “If you ask the tech team, they will say producing the road races under lights at midnight in UHD-HDR. The production team will say unique levels of access to athletes and the editorial deployment of cameras that have never been seen before. I’ll let you know after the event!”

Augmented reality (AR) and virtual reality (VR) will play a major role in the production of this event. Waddington explained: “AR and VR will play a significant part in our production graphics package and we are excited about the storytelling potential for field events for instance. We are developing new analysis tools with our partners Hawkeye. We will be using AR from Hawkeye on long throws.”

IAAF Production’s technical production partner is NEP, and the production will be based on a Fly-Pack. “NEP UK is our regular athletics partner and worldwide leaders with experience of, for instance, the Commonwealth Games, Olympic Games, and FIFA World Cup,” noted Waddington. “We will also work closely with the IAAF’s partners, Deltatre, Seiko, Hawkeye and Angular Velocity.”

The live output is impressive. Depending on the territory there will be approximately 30 hours each day being produced, much of which will be in European prime time. Waddington stated: “We will produce approximately 300 hours live across 10 days of competition. The sessions are in the afternoon, evening, and late-night local time depending on the events. The road races will be held under lights at midnight. Pictures will be available live to rights holder broadcasters in their home markets and time zones.”

Over the 10 days of this event, IAAF Productions will have around 400 staff making up the host broadcast crew, and it expects over one thousand television personnel operating in the IBC. Rights holding broadcasters have booked studios for their own coverage on-site, so there will be seven or eight broadcasters with studios on-site during the event, meaning viewers globally will get to see every moment of the action from Doha.