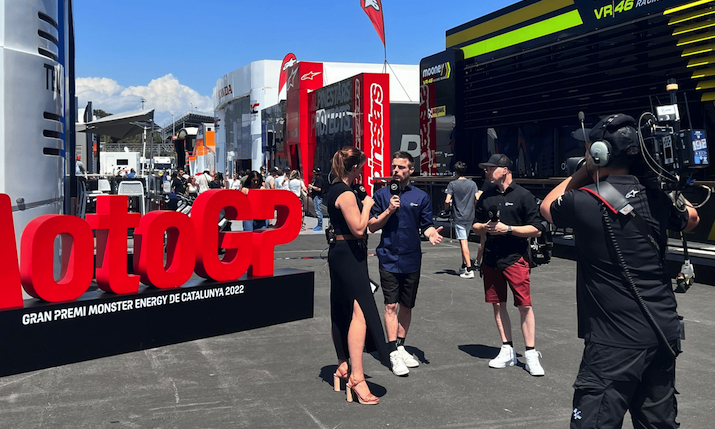 Dorna Sports, the commercial rights holder of MotoGP, utilised Grabyo live clipping and publishing tools to deliver real-time highlights and videos to its social and digital channels during the 2022 World Championship at the Circuit de Barcelona-Catalunya on 5 June.

Over 50,000 people made their way to the track on the outskirts of the Spanish city to witness Fabio Quartararo win his second race of the season, alongside a first corner crash, and premature finish from Aprilia rider Aleix Espargaró.

An unpredictable race as always, MotoGP excelled at providing instant and immersive video coverage of every rider, turn and angle from the 4.675km track to fans across the world, creating a rich online experience using video content.

Before the race began, Dorna brought fans behind the scenes in the paddock and on the track using its social channels. The team also used Grabyo to provide real-time video updates from across Moto2 and Moto3, which took place just before the showpiece event.

This part of Dorna’s strategy allows fans to experience the entire GP weekend no matter where they are in the world, bringing the atmosphere and emotion straight to every screen.

Social media has become the primary destination for these experiences, and Dorna is leveraging its potential across every platform by posting TikTok Live streams, Instagram Reels and posts to Twitter, Facebook and YouTube. The use of Grabyo has played a significant role in growing MotoGP’s social following past 30 million people.

Every MotoGP race is unpredictable and it’s impossible to know when or where, along the 4.675km of track in Catalunya, something is going to happen. But due to a host of technological and creative innovations, Dorna was prepared. Every moment was captured by several cameras along the track, on each rider’s bike and on a helicopter overhead. Dorna covered every angle at all times, and its team was ready to react.

In Catalunya, it didn’t take long for the action to begin. On the first corner, an unfortunate slip led to a crash that took two riders out of the race. Within moments, Dorna’s social team was able to create multiple clips from multiple angles and publish them across Twitter and Instagram using Grabyo. Fans were able to rewatch and analyse the crash within minutes, and those who weren’t able to attend or watch live on TV could witness it as it happened.

It was a thrilling 24 laps which culminated in an extraordinary finish. Aprilia rider Aleix Espargaró crossed the finish line, under the impression he had finished the race in second, and began waving to the crowd and celebrating. However, he still had one lap to go and quickly realised once he was overtaken by three riders, leaving him in fifth place.

Dorna highlighted the raw emotion and immediate reaction of the moment from the Aprilia paddock and Espargaró himself, elevating engagement on social media and enabling fans to connect with the riders and teams.