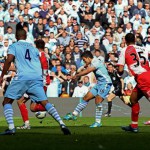 The final match of the season as Roberto Mancini’s men attempted to win their first title was affected by broadcast issues and blackouts, frustrating supporters in Singapore. Issues with the satellite feed halted transmission several times over the course of the match which City won 3-2 with two goals in stoppage time. There were also complaints over the image quality of the broadcast.

However, the problems with the satellite feed for the match were not only experienced by viewers in Singapore.

The entire last 10 minutes of the game, including the dramatic finale, was missed by almost half of Spain, as broadcaster Canal Plus suffered a blackout in transmission. Subscribers to Goal TV were able to view the match uninterrupted.