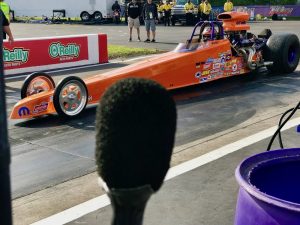 When the National Hot Rod Association (NHRA), was looking to attract more fans and recreate the ear-splitting, earth-shaking racetrack experience for its television viewers, it was presented with a unique challenge. While capturing races in Dolby Atmos, the NHRA was having problems finding a microphone that would realistically reproduce the low frequency component of its product and withstand the incredible sound pressure levels at the launch of 11,000 horsepower cars.

Mike Rokosa, technology executive at the NHRA, found the solution he was looking for in the form of the d:dicate 4007 Omnidirectional Microphone from DPA Microphones.

Rokosa met DPA’s national sales support/business development manager, Gabriel Antonini at this year’s NAB show in April, and the following week, Antonini raced down to the NHRA Spring Nationals in Baytown, Texas to advise on microphone placements. The DPA mics were placed at the start line where the nitro methane fueled cars launch from. The sound pressure levels are the most extreme in this location and for the first 50 feet of a race.

“We experimented with the DPA mics as part of Gabriel’s visit and he also collaborated on some placement discussions,” said Rokosa. “Our overall takeaway was how impressed we were with the d:dicate 4007 microphone. In the locations where we placed them, they had to contend with SPL’s in excess of 160 decibels (dB). They not only survived where other mics have failed, but they delivered a very clean representation of the natural sound.”

Rokosa has been very happy with DPA mics in the short time he has been using them. “Sound is what conveys the awesome power of these cars and we are trying to provide the fans at home with as much of the aural experience of the live event as possible,” added Rokosa. “The deep rumbling of the engines and the sudden explosion are difficult to capture without destroying the device, and the d:dicate 4007 mics seem to be able to survive in this environment.”

Last year, the NHRA had over 500 hours of television programming throughout the year, highlighted by 17 live race-day shows, including four on national network television and primetime Friday night qualifying shows.

“I am very appreciative of how fast Gabriel and the DPA team were in addressing our needs and providing a viable solution,” said Rokosa. “To have someone in the field with us was a demonstration of substantial support and that also allows us to continue to determine how well the mics will hold up over time. We intend to use these mics for the remainder of our upcoming productions and television broadcasts.”