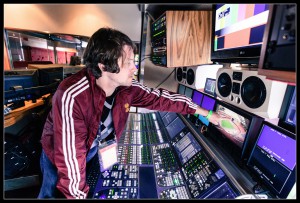 Huub Lelieveld, senior sound supervisor for United Outside Broadcast and Studios, says: “UEFA was adamant that the broadcast quality had to be top class as this was a huge 35-camera production that was going out to broadcasters all over the world. We wanted to make sure the audio quality would be as high as possible and that we captured the ambience of the stadium in phase coherent surround so that it sounded huge in surround, but also still sounded great in stereo and even mono.”

Lelieveld, in conjunction with his colleague Mischa Kortleve, tested the DPA 5100 microphone during one of the UEFA preliminary rounds in the Amsterdam Arena, and duly concluded that it was the right mic for the job.

“We recorded all our microphones to multitrack and decided, after extensive listening tests, that the 5100 was perfect for the Cup Final,” he says. “The DPA 5100 was rigged in the catwalk of the stadium where it was able to capture the whole arena in surround. We complemented this system with four DPA 4006A Omni Microphones, which were hung from the catwalk in each of the four corners of the stadium, and we also used two DPA 4017B Shotgun Microphones positioned on our two Steadicams as these were smaller and lighter than the microphones we usually use.”

Reflecting on the Final, Lelieveld adds: “We were really delighted with the performance of all of our DPA microphones, but in particular the 5100 Mobile Surround Microphone, which sounded fantastic. It was incredibly easy to rig and protect from bad weather and was significantly less expensive than other microphone systems. Thanks to the DPA 5100 Mobile Surround Microphone, we achieved a rich, smooth and fully enveloping sound that was great in its coherence, channel separation and localisation accuracy.”