Super Bowl LV gave Dream Chip’s AtomOne mini AIR camera a chance to be used in the big game as two of the cameras were integrated into the line-to-gain wireless pylons that were positioned at the first-down marker. The cameras were able to get game shots that were immersive, action-packed and laden with emotion. 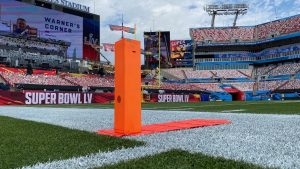 Selected by 3g Wireless, the Dream Chip AtomOne mini AIR camera weighs in at just 45g, with measurements of approximately 30x30x18mm. With an S-mount lens providing Full HD quality resolution, the AtomOne mini AIR is designed for getting right down to the level of the action – providing both a wide angle lens but also the capacity to pick up the fine details. Additionally, the AtomOne mini AIR 10-bit HDR facilitates a rich depth of colour, offering improved image quality through higher contrast and the reduction of shadow and blow-out.

Another key consideration was integration. The nature of the Dream Chip AtomOne range is to be complementary to existing larger-scale camera setups – providing unique angles and unusual perspectives that complement the ‘workhorse’ functions of more conventional broadcast cameras. The Dream Chip camera’s ability to achieve seamless integration is key – particularly through immaculate colour matching which eliminates any need for adjustment in the studio. The AtomOne mini AIR line-to-gain wireless cameras were also integrated with a CyanView controller for precision and intuitive colorimetric control.

“The level of detail the cameras granted was incredible,” he said. “You could see every blade of grass, it was like standing on the sidelines. It offers a new way of looking at production – both literally and metaphorically. Audiences are able to see so much more in terms of action and emotion, due to both the quality of the camera, but also the versatile ways it can be deployed.”

“We are so pleased with how well things worked out,” said Tommy Goodson of AVBB, the master distributor in the US who oversaw the relationship between Dream Chip and 3g Wireless. ‘The AtomOne mini series cameras shows just how much potential there is to really push boundaries in sports production – not just for the Superbowl but across the entire NFL.”

Dream Chip sales director Stephane Ducobu added that the prestige of being involved in a production as momentous as the Superbowl is obviously fantastic. “It’s the perfect setting to demonstrate to the market just what our cameras can bring to a production,” he said. “The rules of American Football may still be a mystery to most of us [on the European side] of the Atlantic, but we definitely know how to bring it to life on the screen.”