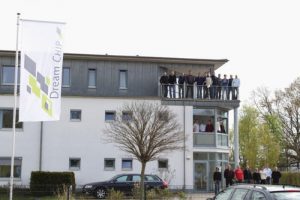 Said Stephane Ducobu, director of sales for broadcast products worldwide at Dream Chip: “Having a strong engineering background and with a focus on vision products, Dream Chip Technologies would like to be closer from the broadcast market to deliver the best products.

“Being a member of SVG Europe is certainly one of the best way to achieve that goal. Our Atom camera range is already successful in every corner of the planet but SVG Europe should be able to bring us to the next level.”

The company focuses on the development and design of ASICs, SoCs, FPGAs, embedded software and discrete systems, and has more than 100 engineers and four development sites in Germany and the Netherlands.

With camera technologies, such as the Atom one, an HDR HD global shutter camera with dual 3G-SDI output, Atom one 4K mini 16 (4K HDR), the new Atom one mini waterproof camera, and recently released Barracuda video/audio H265 IP-streaming platform that won the Product of the Year award at the 2019 NAB show in Las Vegas), Dream Chip delivers quality and performance to customers who require broadcast quality in an industrial package.

Ducobu added: “When we receive quotes from customers like this one, “The camera looks spectacular. If you don’t look very closely, you might not even notice it was a POV camera, and yet it’s small enough to close your hand around. It’s definitely the most impressive POV camera I’ve seen in years,” it shows that we are on the right path.”