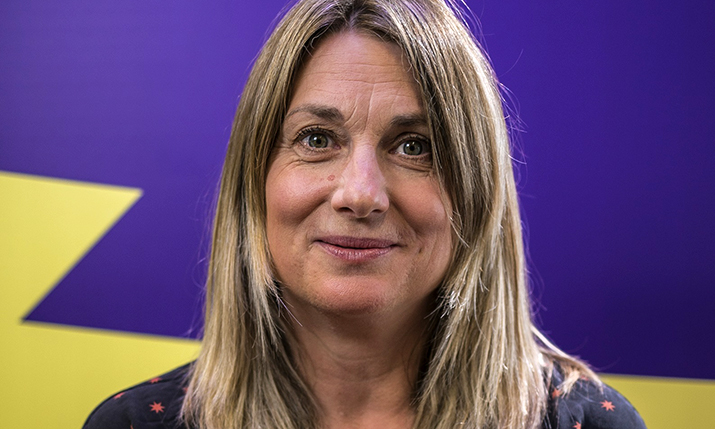 When she took a gap year from university to Australia, Premier League Productions’ director of production and operations, Anna Ward, scored a dream job which took her into the world of sports broadcasting for the first time.

Ward, who is a member of the SVG Europe Women Advisory Board, explains: “I worked on a Tour called ‘Grand Prix Sailing’ which featured 18 foot-long skiffs racing against each other in various harbours around Australia. I couldn’t believe how lucky I was to land that job; fresh out of uni and being paid to travel around Australia to sailing events. I spent a lot of time on observer and hospitality boats in Sydney Harbour which seemed so glamourous to me at the time!”

She continued the trend when she got back to the UK: “After returning from Australia, I got a job at European Tour Productions here at IMG. I couldn’t believe I had that job either…now I was being paid to fly around the world, not just Australia, and stay in nice hotels.

“From there I took a job with IMG’s facilities provider, CTV OB, and working there did mean I worked on more than just sport which was a draw as I wanted to expand my repertoire, but I always missed production and ultimately came back to IMG after a short stint freelancing.

“I’ve been really lucky throughout my career at IMG to work on some great projects,” Ward continues. “The Paralympics always stands out to me as it felt like we really were changing society’s view of disability. Then there were the various multi-sport events I worked on: the Asian Games, Asian Beach Games, the Asian Winter Games. Asia has played quite a role in my career. Notably moving out to Singapore for a year as part of a joint venture with the Asian Tour Golf which was my first head of production role.”

Ward studied Film and Media at the University of Stirling, and she says, “I think that was the first university course in the UK of that nature at the time”. The degree, “sounded fun and exciting, but sports wasn’t in my thinking then,” she goes on. “I’d always enjoyed playing sports but I’m not a mad keen sports fan to be honest.”

As to how she got her current role, Ward had been working as a head of production at IMG on various projects when the opportunity came up to move over to Premier League Productions.

She went for it: “For some people Premier League Productions is synonymous with IMG but I’d never worked on it despite being at the company on and off for so many years. In my opinion it’s our biggest and most prestigious project and well resourced, so what’s not to like?”

“One of the reasons I am proud of working for the Premier League is the positive impact the League has on the world around it, and our part in amplifying those messages,” adds Ward. “Their involvement with initiatives such as Rainbow Laces and No Room for Racism are more exciting to me than the latest bit of tech.

“I’d worked on big OBs, such as the Open Golf, the Paralympics and various Asian Games but I’d not worked on such a large production that is ongoing as opposed to a one-off event,” says Ward, commenting on what was challenging about getting into the role of PLP director of production and operations. “Getting my head around everything the department produces – and the budgets – was tricky to begin with as was understanding how each part affects another part of the operation. I soon realised you couldn’t make decisions in isolation as it would likely impact another part of the department.

“I found that frustrating to begin with as it slows down the decision making process,” she notes. “And my lack of football knowledge made things difficult at times; it took me a while to understand the schedule and how that impacted on budgets and deliverables. I’ve just about got there now!”

She adds: “I find the pace quite challenging at times. Everyone works at 100 miles an hour and, especially in my new role which has more of a focus on culture, I think it’s difficult to get people to stop and reflect on how and why we operate the way we do.”

There is a lot to enjoy about the job, which she started in June 2021. Ward comments: “I like the variety of what comes across my desk. I also like that in my new role as director of production and operations I need to think more strategically; I’m moving away from implementation and more into thinking about how we can continuously improve what we do. I really enjoy researching the latest thinking on management and leadership principles and considering how we might bring that to PLP, although finding the time to do that research can be challenging.”

Ward says that being typecast into certain roles when she first started out in sports broadcasting was something she had to negotiate. “The biggest challenge I faced when I was younger is that women were typecast into production manager (PM) and organisational roles. Originally, given my degree in film studies, I wanted to produce programming, but it was very difficult to cross over from an admin role to an editorial one. Thankfully I don’t think that divide and stereotype is as severe anymore; although I think it still exists.”

However, she adds that there were bonuses to being a PM: “When I was younger travelling was always an attractive part of the job for me and I loved working on big events; the challenge of organising all those people plus I liked being in the middle of what was going on. As a PM you have so many touch points in the process that you understand it end to end, that was a draw for me.”

To other women looking to move into a role in sports broadcasting like her own, Ward says: “In my experience, you need to be resilient and reliable. I’m pretty sure I’ve only got to where I’ve got to because I kept going, even if at times it’s been hard and if I said I was going to do something, I did my utmost to deliver; the old mantra of under promise and over deliver.

“I’d also say take as many opportunities that come your way as possible,” she continues. “I’ve suffered from a lack of confidence over the years and I’m really grateful for the people who have pushed me along the way and asked me to work with them on projects that I might have otherwise have thought were outside of my experience or ability. They often had more faith in me than I did in myself, and each of those opportunities meant I not only learnt things but also grew in confidence; be that being cajoled in doing some public speaking (which I still find nerve-wracking) or moving over to Asia to set up an office over there.

“I’ll be forever grateful to the people who gave me the opportunity to do those things, even if at the time I was pushed out of my comfort zone.”