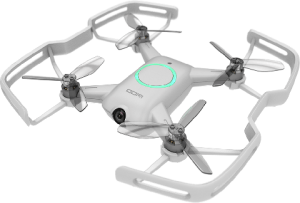 DR1 combines top professional pilots and outdoor locations into high-octane racing event series, produced and distributed on a global scale. Currently, DR1 Racing events are broadcast in more than 100 countries and 300 markets around the world. DHL has expanded its existing partnership with DR1 Racing to include all racing series formats, as well as renewing its title sponsorship of the Champions Series.

From this year’s competition, AMW is producing a six-episode, 60-min formatted series for Eurosport, which joins Fox Sports Asia and beIN Sports in returning as DR1 Racing’s global broadcasting partners, meaning the series will be shown in more than 100 countries around the world. BeIN will air the first of five seasonal races this month showing the finals on 8 November. The series will start on Eurosport on 25 October at 7 pm GMT.

Alongside the Mini Quad Drones, 15 of the world’s greatest drone pilots were given the first ever opportunity to fly giant Pro Class drones, which debuted at the 2018 Series. Measuring almost one metre in length and weighing nearly five kilos, they can reach speeds of 100mph in just over one second.

AMW designed its 2018 workflow with the larger drones in mind, said David O’Carroll, EP and operations director at AMW: “The workflow this year was forward-looking. Next season the drones become larger, the jeopardy increases and the DR1 are aiming for a live product. We kept the workflow simple but put the building blocks in place so there is a solid base for the next cycle.”

As to the setup, AMW is providing as host broadcaster for rights holders and broadcasters, O’Carroll stated: “This year the programme is post-produced but when DR1 becomes a live product we will be able to produce individual outputs for each of the broadcasters.”

Over the course of this year’s event, AMW acquired 30TB of footage. On working with broadcasters, O’Carroll commented: “The team produce a world feed from the building blocks created on site (the race assembly, interviews, colour, GFX, data and so on,) then tailor to the broadcasters need; part length, presenter-led, etc.”

The races took place over the summer at a series of venues, from the deserted Château de la Mothe-Chanendiers near Nantes in France, followed by the Loibl Alpine Pass and Castle Sneznik in Slovenia and the Tulove Grede mountain range in Croatia, climaxing with a final at the DHL Post Tower in Bonn.

On the challenges in filming drones, speed is an issue commented O’Carroll, who said, “they are very fast, and this year very small. From a production perspective, the biggest challenge was amplifying the characters”.

Brad Foxhoven, founder and CEO of DR1 Racing, said: “To grow the sport of drone racing, the size of the racing drones themselves needed to become larger. This new addition to the Champions Series redefines drone racing, and reinforces DR1 Racing’s commitment to innovation in the emerging sport. We’re excited that a company with AMW’s experience and track record of innovation will be bringing this exciting new format to a global audience.”

In the UK, Imogen Barclay will present the series with Formula E’s Jack Nicholls as lead commentator. AMW have created a graphics package and race coverage look and feel that brings the personalities of the pilots to the forefront. AMW also embedded a film crew with the race teams who captured their adventurous road trip across the continent.

Lawrence Duffy, AMW MD, said: “This series perfectly suits our signature in creating a unique hybrid of adventure, racing, travel and entertainment for a younger-skewing audience. Drone racing is fast, very competitive and undoubtedly has a following that marks it out as a true millennial property. We look forward to bringing the series and sport to a new audience.”