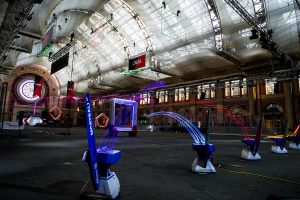 First person view (FPV) racing of small quadcopters is shifting from hobby into mainstream sport by blending the digital and physical worlds in a way no esport or traditional racing league can match. That’s according to Nicholas Horbaczewski, CEO/founder of the Drone Racing League (DRL), which recently secured a $20 million investment led by Sky and Liberty Media (owner of Formula One). However, although there is limited live streaming, FPV racing is a strictly post-produced action until the economics stack up for it to go live.

Launched in January 2016 as the only global professional drone racing organization, DRL’s five races in the 2017 Allianz World Championship Season are broadcast on ESPN, and in more than 75 countries with partners including Sky Sports, ProSiebenSat.1, Disney XD and OSN.

According to Horbaczewski: “The end product is only possible with every aspect of media, event, competition, and production working together in a coordinated, optimised way. It is only through this comprehensive effort that we’ve been able to bring drone racing to the forefront of entertainment, and transform FPV-racing into a mainstream sport.”

DRL designs and manages the entire drone racing and broadcast ecosystem for its events – everything from the drones and courses to the timing and length of the races to the capture and presentation of the sport.

Racing quadcopters are small, fast and fly in all three dimensions, drastically increasing the challenge for camera operators (imagine trying to capture six golf balls driven at the same time in a wind storm). Since the sports world already has good access to many forms of racing, pure racing alone is not sufficient to engage a mainstream audience, reckons Horbaczewski. Therefore, DRL also capture the human and technology sides of each event to incorporate them into the final shows.

“While everyone can understand that the first drone to cross the finish line wins, presenting the race in a compelling way for mass audiences is a big challenge,” he says. “Post-producing our shows gives us tremendous flexibility to find the simplest, most engaging way to convey the competition to audiences largely unfamiliar with the unique aspects of drone racing. We already present a limited stream of the racing live to the small audiences we permit on site. We have the technical ability to develop a full network quality live broadcast of the sport with enough real-time information to engage mass audiences, but the economics of the sport do not yet justify the dramatically increased costs to do so. As soon as the world has enough true drone racing fans who care about real-time results, we’ll be prepared to deliver live broadcasts.”
Camera requirements

The production typically deploys 50 to 60 cameras per event. In the remote production truck, DRL use 8-12 Grass Valley LDK 8000 Elite or LDX 86 Universe UHD-HDR Cameras (2-4 on jibs). It typically deploys one cable or rail cam and one Grass Valley Hi Speed 6x Camera on a remote robotic head run through the truck. It brings 23 Marshall CV345-CSB POV Cameras to each event (10-12 on the cockpit and audience, 1-2 through the truck in obscure locations on the course, and the rest throughout the course recording locally). Five Varicam LTs are used for interviews, behind the scenes, and talent stand-ups. Another two RED Epics capture dramatic drone footage.

Each drone itself has two cameras: an SD low latency analogue HS1177 600TVL for pilot navigation, and a GoPro Session 5 for post production, both of which operate automatically with no remote controls. Finally, DRL deploy up to 10 GoPro Hero 4+/Black cameras on the course in unusual or otherwise precarious locations.

The manned cameras are routed to the truck via triax, SMPTE and fibre. The switcher is a GVG Kayenne Elite 3G K-Frame HD Production Center. For the house feeds, fibre is used and then converted as needed depending on the destination source in the gallery (HDMI/SDI).

Horbaczewski explains that the production record in four primary codec’s ranging from 4K down to HD resolutions. At any given event there are 16 to 22 cameras that run through the production truck and are recorded on SSD KiPro’s. Another 30+ unmanned POV style cameras supplement the course coverage. Those cameras are recorded either at the camera or brought back to multiple control points as dictated by the venue and camera positions. On top of this there are seven cinematic cameras providing a range of coverage all captured to in-camera cards and manually delivered to the media management station.

All this generates about 250 hours of footage a day. Figuring out how to transfer that much data each day was a challenge, especially to achieve a cost-effective solution, live and within the RF limitations, and ensure that the footage ends up with a proper level of redundancy and verification.

“Because of our broadcast timelines, we also have to proxy, catalogue and meta tag the footage in the field along with many of the other processes that would typically be handled in post,” he says. “This allows us to more effectively hit the ground running when the footage gets back to our post facility.”

Depending on the size of the course there are 30-50 FX microphones throughout the venue. These are routed through the truck and then recorded on the various KiPros that are used for the video feeds of the manned truck cameras. Mics mounted to the POV cameras on the course and elsewhere are locally recorded at the camera. There are also 12-14 wireless microphones used on talent and drone pilots. These are recorded with ENG audio techs on portable multitrack recorders.

“While we produce a simplified live feed to the participants and small audiences we permit on-site, the big difference from conventional sports production is we’re filming primarily for post-production at this point,” says Horbaczewski. “We deliberately minimise staff in the production truck, delegating graphics, replays and highlights, and commentary to post-production. This is primarily a financial decision, but it also gives us a lot of time to analyse the racing to determine how to best present each competition in the most compelling way. We can adjust how many heats we present in each show, and how they’re distributed between commercial breaks. This allows us to work around races that aren’t as inherently compelling (such as someone leading from start to finish or lots of early crashes). We can also work in human and technology elements to enhance the competitive drama.”

Post-production starts with media management, proxy creation, and heat alignments (aligning all 50+ cameras on a single Adobe Premiere for each heat including before and after the racing). One team refines the live line-cut, incorporating all the additional cameras as appropriate, and selecting replays/highlights. Another team reviews, selects and organises the non-race content. A third team starts building the overarching story arcs for each show. A fourth team works on features and animations. And a fifth team starts building the graphics by hand (it’s still more economical than automation at this point).

“We then build rough versions of the shows with scratch tracks, refining and cutting to time as we go,” he says. “We do the final VO and refined edits before the formal sound mix and colour correction processes. This is always a multi-week process, with multiple shows at different stages throughout the process.”

Switching to 4K is primarily an economic question. 4K trucks are “drastically” more expensive than HD trucks, and the data management effort would have to expand significantly to handle the transfers within the available time on site. Swapping out 4K POV cameras is technically possible but expensive.

“That said, most of what we capture outside the racing is already in 4K,” says Horbaczewski. “Right now, there’s not an established financial incentive to provide a full 4K show.”

There are similarities in first person game-play with esports – and DRL is exploring esports’ nature and quantity of on-screen data.

“Going forward, we will continue to blur the lines between the real and the virtual to enhance viewer and participant engagement,” stresses Horbaczewski. “We are extremely interested in the opportunities for enhanced viewing experiences through the blending of digital and linear distribution.”

DRL has already developed a realistic FPV drone flight simulator and video game that was used to qualify one of its pilots. As RF technology, processing speeds, and multi-screen distribution improves, the integration of video game features into real racing will continue.

DRL has the technical ability to generate HD streaming and real-time highlights and graphics and it has RF and video technology in place to circumvent mobile phone, cellular and wifi interference. “We already use a remote production truck with the same capabilities for replays and highlights as other sports,” says Horbaczewski. “We are also well underway in developing real-time positioning of the drones on the course integrated into a database with APIs for scoring and analysis, along with a templated graphics system in the truck, which would be essential for engaging mass audiences live. We have the roadmap for all of this ready to go – once the economics justify it.”