Streaming is usually seen as a way to deliver on-demand and catch-up services, but increasingly it is also being used for live TV, particularly sports. A notable example of this is New York-based fuboTV, which streams linear TV in the US and more recently in Spain.

Although it is on the internet, 90% of the content its subscribers watch is on live linear channels. “The importance of linear around news and sport in particular, and around some big entertainment pieces,” is still significant even now, with 85% of viewing still on the big TV at home rather than mobile devices, Hannah Brown, fuboTV’s chief strategy officer, told last week’s DTG Summit in London.

The company has almost $200 million backing from the likes of Sky, Fox, AMC Networks and Scripps Networks Interactive. “Content distributors and platforms really looking to understand how virtual distribution of linear channels […] would develop,” she said.

When it launched in 2015, soccer was fuboTV’s core offering, which it expanded with many Spanish-speaking channels to further tap in to the big Hispanic audience for soccer. It has since added more premium channels, particularly for sports, which has required further investment.

“Last year alone we spent more than $100m on content licensing costs,” said Brown. It streams most NFL, NBA, MLB and NHL games, as well as college sports and the major soccer leagues from around the world. It has also added entertainment and news channels. “People might come in for a sports event, but what brings them in on other days of the week and other parts of the day, and that’s news and entertainment, and for the family getting full value from a broad range of content.”

It means it has now become a full cable and satellite replacement service, seeing a huge growth in subscribers, in revenue per subscriber and in hours watched by each (more than doubling), with about 150 minutes per day.

“Sport is a huge part of our marketing, and how we acquire a customer, and this time last year 60-70% of our content consumption was around live sport,” she said. But that’s now 38-39%, with an equal amount being entertainment programming and the rest news, which has helped with customer retention and the amount of advertising revenue the service can generate. 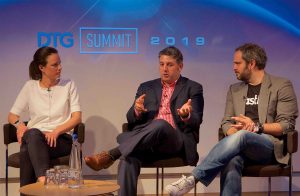 Some 30% of its subscriber base is Hispanic, with 30% of the content viewed in Spanish, and fuboTV recently launched in Spain with an entertainment-led service (Game of Thrones is its big attraction), “and we’re looking at how we might build that out into other international markets.” To ease roll-out, its first Spanish product is a lower-price offering. Once it has worked out any issues it will add premium content.

She believes that being US-based will ease its international progress. “If the US is your first market, the US is really 50 countries,” said Brown. Not only does a marketing strategy devised for New York or San Francisco not necessarily work in other parts of the country, but distribution often has local implications.

FuboTV has a big portfolio of regional sports and channels, and which ones a customer can see changes depending on where they live. Its service allows for portability, so a New York subscriber can watch their locally enabled channels on their mobile when they are on the west coast.

This isn’t just a technical issue, because as a fairly-recent start-up “Fox and Turner have to trust us to defend their content within the state or the region in which they distribute it,” and the Premier League also has to be certain there are no issues with regards to any other international distribution rights it has sold. Brown believes that having tackled those problems in the US, it is now in a good position to expand internationally. “The portability issues in Europe are a little bit different than the US” – but not that different technically.

It live streams some games in UHD, and making sure viewers can see this without interruptions has been vital, and both global rebuffering events and player media errors are consistently below 1%, particularly since it solved some storage issues and network problems in January 2018. Achieving this has been down to working with a many technology providers, such as Fastly, which “has been a phenomenal partner for us in allowing us to stream reliably at scale,” she said.

Fastly has 60 SSD-based PoPs located strategically at internet exchange points, using a 45+TB network that is easily scalable, and an API-driven platform for rapid configuration – not just by Fastly but also its customers.

“The more you serve out of the cache, out of the edge of the network, the less trips you have back 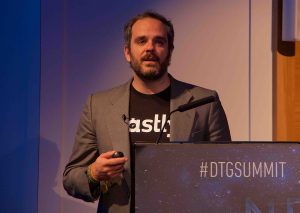 to your origin infrastructure,” which will reduce costs and speed up connections, said Gonzalo de la Vega, general manager of EMEA, Fastly. It also needs to be scalable, “and scaling needs to be our problem, not your problem,” he said. Sometimes you know in advance when you will need to scale rapidly, such as for important sporting events, but occasionally you need to scale quickly with no warning, which requires agility.

Three-quarters of users will abandon a site and not return if it doesn’t work, or is too slow. So it needs to deliver, especially for a premium service like fuboTV, for which Fastly achieved a buffer rate of just 0.49% during the Super Bowl.

One major advantage of streaming over broadcast is how it can be personalised to create video streams tailored to individuals’ preferences, something on which content delivery network Velocix is increasingly focused.

“Each stream needs to be as individual as the person watching it,” said Anthony Berkeley, VP business development EMEA/AP, Velocix. It is now focused on enabling services that allow consumers “to have an experience that is not just about delivering a great user experience with low latency but makes it a relevant and contextual experience.” It should be about “far more than just watching a stream.”

Personalisation is also more than just targeted ad insertion or replacement, which he believes is a “very linear way of looking at things” and needs to be itself replaced by something much more dynamic. “It’s not about one piece of context, it’s about all of the context. It’s about the network. It’s about the device. It’s about the content. It’s about what’s going on with that user elsewhere,” integrating with smart home devices for example, making personalisation “a multi-dimensional problem.” It also has to be scalable, combining the power and economics of delivery with “unique streams to each individual user,” he explained.

As more broadcasting is done using IP, he believes this kind of personalised experience will become the norm.

It also has to deliver this consistently whatever network or device the user is on. “Today, with adaptive bitrate streaming, we often let chaos theory run the networks. We let the client decide what’s best for the consumer based on the bandwidth they’re getting. That’s not really a great way to ensure a service. We need to be in charge of that quality. We need to be managing that quality to make sure they get the right service at the right time,” insisted Berkeley.

That relates most readily to advertising, which is where the money is today, but there are a lot of technical challenges to this personalisation. “There is far more complexity to delivering an advert over an adaptive-based streaming world than there is in a traditional broadcast world. Making it relevant isn’t just about making it relevant to the consumer, but it is also about making sure that advert is successfully played out and successfully delivered.”

Velocix believes that soon anything will be able to be a screen (table, window, any type of surface), and once that happens “the relevance of what is shown on that screen becomes far more important, and personalisation is what makes those screens relevant.” Ensuring this will require intelligence, which won’t sit in the devices but in the network, he said.

Personalisation is also important for Netgem, which has been working on internet TV since 1996. It has developed a completely cloud-based platform that delivers a combination of linear TV, catch up and on-demand services, which is in use in many European countries, such as with EETV in the UK, Post Luxembourg, and its recently launched personalised TV services in Ireland. 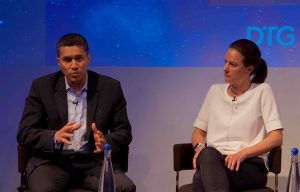 Stream of consciousness: Sylvain Thevenot from netgem.tv and Hannah Brown of fuboTV at the DTG Summit

“When it comes to choice, the challenge is the relevance,” said Sylvain Thevenot, managing director operator solutions, netgem.tv. It is aiming to address what he calls the four Ps of personalisation: “Pertinent preferences presented with privacy,” to try to offer people the most relevant content, influenced by their opt-in choices and their usage, with options laid out very simply so that they can find them easily.

As the TV screen is typically used by a family, the most personal choices are presented on an individual’s mobile device, and their selection can appear on the TV, but, for privacy, “this choice is not shared with the living room profile,” Thevenot explained.

A stream of challenges

Two of the biggest issues de la Vega sees facing the streaming industry are: regulation, with countries like China and Russia having regulations that make it more difficult for Fastly to place its servers there, and concerns with European regulations like GDPR; and access to the last mile, which is where you tend to lose control, and might require deals with ISPs, additional technology, or crossing your fingers…

One of the fundamental challenges for Berkeley is “where is the edge. How close to the consumer can you get?” With 5G he is seeing “a far more decentralised distributed architecture that allows us to really penetrate deeper into those networks, to really serve the new experience.”

The closer to the edge you get, the better the experience, the lower the latency and the more certainty. Today, part of the personalisation Velocix has developed is simply to help manage the uncertainty of what’s happening, “to put yourself in control of that edge experience because today you let clients do their best with what they understand is going on, but there is no overall command and control infrastructure in the clients, so getting closer to the edge reduces that uncertainty; combining with that personalisation gives you control, and I think part of it from a CDN and delivery perspective is us looking how far we can go to the edge, what is the right edge to go to in different technologies and markets, and how do we handle the spikes.

“We’re talking about edges that may appear and disappear in real time to handle those spikes and events. How do we become more dynamic, more reacting at the true edge of networks rather than the core of networks?”