The Standard Charterer Dubai Marathon has the marathon circuit’s richest purse and this past Friday some broadcast history was made as it was transmitted live via Dubai Sports Channel for the first time ever. IEC in Sport organised the production and provided graphics and the specialist RF gear for the motorbike and helicopter coverage (supplied by EuroMedia) while Dubai Sports Channel provided the OB van and crew. 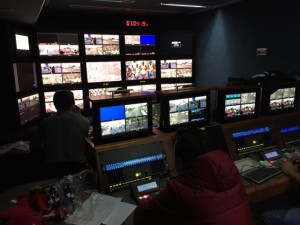 A look inside the Dubai Sports Channel’s production truck that was used for the Standard Chartered’s Dubai marathon.

“The main challenges were managing flying permissions to take off before dawn and dealing with the changing light as the sun rose,” says Peter Angell, IEC in Sport, COO, who was executive producer for the event. “The RF worked perfectly from the first frame and had very little breakup. And there were some spectacular shots of the sun rising through the Dubai skyline.”

The live HD production made use of nine hard-wired cameras around the course (including a 30-foot jib), two RF handhelds, and an SNG camera at the far turn on the course. The course layout was a long, narrow circuit on a single road.

“In addition we had three live motorbike cameras [from TV Motos International] and one Cineflex camera in the helicopter [provided by ACS], all linked back to the main TV compound via a fixed-wing relay aircraft that orbited the skies.

The marathon was able to leverage the fact that EuroMedia was going to be in town providing RF gear for this upcoming weekend’s coverage of the Tour of Dubai cycling event. And Germany’s Netventures provided TV graphics (they also provide graphics for the Berlin Marathon). 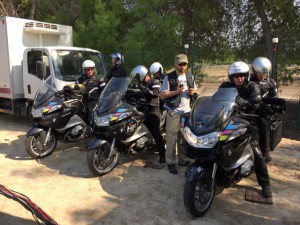 The production was the first for a deal between IEC in Sport and Dubai Sports Channel that runs through 2018, with an additional four-year option. In addition to international media rights distribution, IEC is providing executive TV production consultancy and management.

“We are delighted to appoint IEC in Sports to work closely with Dubai Sports Channel, our host broadcaster, to bring the biggest marathon in the Middle East to the world” says Ahmad Al Kamali, President of the UAE Athletics Federation.

“We have had a very successful partnership with the organisers and this year the scale of production brought more quality to the richest marathon in the world,” he says. “The Marathon has proved to be one of the best sports event in Dubai and we are delighted to be the official host broadcaster once again.”