By any estimation the last three years have been hugely eventful in the world of broadcast audio – the most dynamic, it might be argued, since the transition from analogue to digital audio began in earnest. The European Broadcasting Union (EBU) has been highly engaged with these developments, and in recent days has updated SVG Europe on its ongoing activities related to loudness and Next Generation Audio (NGA).

It is now nearly nine years since the EBU published the first version of its Loudness Recommendation, EBU R128, which offers a method by which to normalise audio using a standardised measurement (according to ITU-R BS.1770) and loudness meters instead of Peak Meters (PPMs) only. The core recommendation is that audio be normalised at -23 LUFS ±0.5 LU (±1 LU for live programmes), measured with a relative gate at -10 LU.

EBU R128 is now in its third version, while in the last few years there has been one notable supplement and several additional or updated specifications. Perhaps most significantly, the EBU R128 s1 supplement dealing with short-form content such as commercials has been simplified to include only a Maximum Short-term Loudness measurement (+5 LU or -18 LUFS) as a parameter to prevent overly dynamic mixes. Other developments include an updated version of the ‘EBU Mode’ Loudness Metering specification and further refinements to the Loudness Range specification. 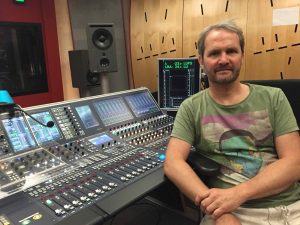 The EBU’s loudness work is spearheaded by its PLOUD Group, which is chaired by Florian Camerer, who is senior sound engineer at Austrian broadcaster ORF. He reveals that a forthcoming supplement to R128 will deal with the issue of loudness for streaming services. “Streaming is of course a topic is that is preoccupying broadcasters everywhere at the moment. For some time now we have been working on a supplement, known as s2, which will provide loudness recommendations for these services. We are in the process of drafting a new version at the moment,” said Camerer.

One of the primary challenges to be overcome with s2 is the need to accommodate consumption on a wide range of devices – both current and probable future ones – as well as the variations that can occur between markets. For example, said Camerer, “if you buy an iPhone in Europe at the moment it has 10dB less gain than one purchased in the US.” Fortunately, recommendations that have already been ratified by the European Commission will see European devices achieve parity with their US counterparts in the next few years.

“That’s great news as it means we can have a lower target loudness,” remarked Camerer, adding that’s it’s probable that the existing broadcast normalisation level of -23 LUFS will also be the “main aspect of the recommendation [for streaming], although during the transitional period we might have a target level closer to -16 LUFS – like that employed by iTunes, for example.”

Invited to consider the extent to which the major European broadcasters are of a shared mindset when it comes to applying loudness criteria to streaming, Camerer says that “it really depends on how active they are in the streaming realm. For some it’s been a key topic for quite a while; others have discovered it more recently.” A few broadcasters have already implemented their own (temporary) loudness criteria, although these are more likely to be in the range of -15 to -20 LUFS at present.

Given the ongoing explosion in the range and diversity of online services, it is generally anticipated that it will be some time before loudness standardisation is commonplace Europe-wide. As Camerer observed: “A public broadcaster is more likely to stick to [-23 LUFS], while commercial ones might be more inclined to look at the competition of YouTube and other platforms, and could therefore opt for a higher level – at least for the time being. We will have to see what happens when [European devices] begin to offer more headroom and gain; it could be at that point that a lower target level will become more popular.”

More imminently, Camerer expects to deliver a full update on the progress of EBU R128 s2 during a PLOUD meeting at IBC this September.

Not surprisingly, one of the other audio-related fronts on which EBU has been active of late is Next Generation Audio. As NGA adoption – both in the form of trial/temporary and permanent services – continues to grow, the EBU has a important role to play in encouraging awareness of the new opportunities for broadcast production.

Paola Sunna, senior project manager, EBU Technology & Innovation, commented: “EBU is trying to raise awareness of NGA, focusing on object-based audio as a way to enable a number of new features. These include the personalisation of content representation – such as speech level customisation, multi-lingual features and accessibility services – and the opportunity to create immersive experiences for any kind of content.”

The EBU is also keen to emphasise NGA’s scope for delivering audio content in what Sunna described as a “format and system-agnostic” manner: “NGA programme material is multi-purpose and adaptable, allowing NGA-literate receivers to render a suitable output from it for any given playback system and environment, and freeing broadcasters from the need to produce multiple versions of a programme. The expected costs will be comparable to a traditional multi-channel-based production – but with the strong advantage of scalable usage.”

In the context of the current diversity of NGA-related technologies and techniques, the EBU is also working to bring some clarity by drawing attention to specific forms of metadata and rendering for broadcast production. For example, it is actively promoting ADM (Audio Definition Model)/S-ADM (Serial ADM for live scenarios) metadata as the metadata of choice for NGA programme production.

The EBU is also promoting the adoption of EAR (EBU Audio Renderer) for NGA programme production and monitoring. EAR – which is an open source renderer capable of natively interpreting ADM metadata – was developed by an alliance of R&D and broadcast organisations, namely the IRT, BBC, France Télévisions, bcom and the EBU Technology & Innovation department. It was published in March 2018 (https://www.ebu.ch/news/2018/06/renderer-for-next-generation-audio-wins-2018-ebu-technology–innovation-award).

In parallel with these developments, the EBU is working with multiple NGA technology providers – including the likes of Dolby, Fraunhofer IIS and Xperi – on methods by which end-to-end workflows can be made ADM-compatible. “We are also involved with various trials and workshops with these technology providers,” added Sunna.

Promotional activities will continue throughout the year and beyond. These will include the projected post-IBC scheduling of the EBU’s first Master Class on the subject of object-based live mixing. Set to address the creative opportunities of object-based audio production for a number of different programme genres, the event will be held at the studios of France TV/Radio France.

Specific details regarding the content and timing of the Master Class will be released soon, said Sunna.