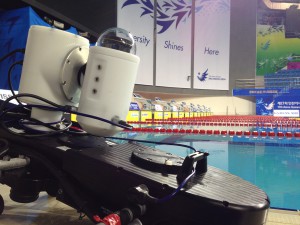 Kazan is the capital and largest city of the Republic of Tatarstan, Russia and has a reputation as an important sports centre. Starting on 24 July, the city hosts the 16th FINA (Fédération Internationale de Natation, world governing body for the five Aquatic Disciplines of Swimming) World Championships. Around 2700 athletes representing 190 countries are competing in Kazan, with an anticipated worldwide audience of 4.5 billion closely following the action. Host Broadcaster for the 17 day Championship is the European Broadcasting Union (EBU). “We were appointed by FINA in October 2013,” explains Franck Choquard, managing director, Eurovision Production Coordination SA (EPC). “From early 2014 onwards, our project team had regular meetings in Kazan — every two months — up to the World Broadcaster Meeting in early October 2014. Since then, our team has attended monthly meetings to cover all planning aspects of the event.”

He continues, “Our duty as Host Broadcaster is to produce high quality international signals and meet our fellow broadcasters’ expectations in order that all their viewers or listeners will enjoy the emotion that an event of this magnitude generates.”

Managing a host broadcasting operation of this magnitude remotely (EPC is not, of course, a Russian based organisation), is a major challenge. “Thanks to our invaluable experience gained from, for example, the IAAF World Championships in Moscow 2013 and the 2015 FIS Alpine World Ski Championships in Vail, EPC is a unique position and capable of delivering high level HB operation without having permanent representation on site.”

These championships are the first in FINA’s history where the main swimming pool for synchro and swimming has been constructed within a football stadium — the Kazan Arena. Three other venues will be used for the championships; the existing Aquatics Palace for the diving events, the temporary Water Polo Arena and, in front of the Kremlin, the open water and high diving venue at the Kazanka River.

The venue at Kazanka is a temporary construction and has been especially erected for High Diving competitions. Two towers are installed at the Kazanka River embankment – a 20 metre TV tower sited in front of the High Diving tower.

“The International Broadcast Centre (IBC) will be located in a temporary structure within the Kazan Arena venue and close to the Aquatics Palace,” says Choquard. “In all, we will be serving more than 60 Rights Holder Broadcasters (RHBs).

He goes on, “We have an overall team of 300 people working in all areas, obviously production is the biggest one and we are working together with our colleagues from Spanish television TVE for Swimming and Synchronised Swimming production. Our   Russian partner, Panorama, provides us services for TV-production of Open Water Swimming, High Diving, Diving and Water Polo.

Looking after the set up and production are Marc Stanislas, executive producer, Joris Wauman, head of production and Francisco Moreno, head of technical operations. The senior director, Javier Serrano from ES/TVE, carried out four site visits in order to create the overall production concept for each specific event. Following those visits, two seminars were organised where the other directors could discuss the approach and make any amendments to the production plan before the final one was drawn up.

Choquard says that the aim of each camera plan is to capture the excitement of each discipline. In Swimming and Synchronised Swimming among a number of other cameras, the use of a cable camera, an underwater rail and a high speed submersible enables the directors to capture all aspects of the sport. “We need to see the battle for victory, the beauty of the choreography and the interaction between men and water in hyper slow motion pictures.”

He continues, “In Diving and High Diving, with the help of cameras positioned above the diver we try to transmit the audacity and technique central to the discipline. For Water Polo in-goal, underwater and tactical cameras will assist the viewer to appreciate the various aspects of the matches.  Finally, in the Open Water Swimming competitions cameras on boats and a few top position cameras will enable everyone to follow the race closely.”

Major Russian company Panorama is providing creative and technical services at four of the Championship venues, and OB facilities at all five sites. In addition, the company is supplying technical facilities for some RHBs, such as ARD/ZDF, Asahi TV and NBC, for their unilateral production.

“We were involved with the FINA Diving World Series in April in Kazan, which was the test event for these Championships,” explains Vasily Kiknadze, Panorama CEO. “And that provided helpful insights into the upcoming events.”

Panorama utilises a great many specialist cameras, including HSSM for each venue, micro cameras, polecams, CableCam 1D and 2D. CableCam 2D is used for Swimming and Synchronised Swimming showing the interior space of the stadium and the athletes, while a robotic system based CableCam 1D with three remote cameras moves over high-boards. Four Phantom v642 cameras add to the beauty of the water sports, capturing splashes of water and athletes faces in their plasticity and fluidity.

EPC provides several robotic cameras, including Q-balls, and Pico LSM camera on a submersible polecam. Kiknadze reveals that rigging for the specialist cameras began on 19 July, while two days later the main set up will take place.

“Our plans call for four of our trucks to be used for the Host Broadcaster operation, while a further three will serve the RHBs. In all, we will be using over 160 of our personnel for this high profile event”, Kiknadze says.

Specialist cameras are being supplied by a French company, Deep Vision. These include Spirit Track which is an HD Underwater Tracking System designed with a turn head and a skater on a 32 metre rail. This system allows full pan, tilt, roll and zoom operation and can track in front of a swimmer at 50m world record pace.

Other cameras include NEO, a multi-functional underwater remote controlled HD system designed to capture swimming, shots of flip-turn, diving, synchronised swimming, water polo and diving action from beneath the water line. Another poolside motorised system combines a track arm, a remote control underwater video camera with pan, tilt and roll unit in one compact assembly that can rotate to look in any direction in and out of water. Its design makes it possible to capture footage of a swimmer from above and below the water line and the transition between.

Working with the organising committee, EPC has set up a full ring protected dark fibre backbone between all venues to transmit all necessary signals. “In order to protect the visibility of the timing partner, FINA only allows selected broadcasters to use the clean feed,” states Choquard. “However, English is the language that will be used for all graphic overlays.”

EPC will be utilising its kit within the IBC and for all terminal equipment. “We are offering a centralised media server, using a Quantel based solution with a specific MAM developed for EPC to cover sporting events. In addition, all RHBs will be using their own server systems for their own production needs. The whole operation will be based on a tapeless workflow.”

FINA is offering to the RHBs a live English commentary service on most HB international feeds, including summaries. FINA guide commentary will begin after the opening animation and conclude before the closing animation. Choquard concludes, “The broadcasting world can be assured that there is a dedicated team ready to help in all areas and to ensure that you have the best conditions for your work.”