Editorial Comment: Clear communication in an age of disruption

There can be no doubt that the sports video production business is going through a time of great disruption. Technologies, enablers and platforms such as remote production, 5G, OTT, AR/VR, AI, 8K, immersive audio, HDR and more are jostling for our attention.

What could be more ‘game changing’ than the NBA’s recent dive into smartphone-only capture on a Summer League game, delivered via 5G infrastructure to fans? “The Smartphone View alternative broadcast” is how Steve Hellmuth, EVP, media operations and technology, NBA Entertainment described this fantastic innovation. No more multi-camera TV crew, no more TV production, or OB compound, or ‘broadcast’?

And while broadcasters continue to battle each other and large production outfits for sports media rights contracts nationally and internationally, into the frame have come new OTT-only operators who again bypass ‘television broadcast’ and go direct to your device via live video streaming.

Of course they are targeting the younger generation of consumers who have already broken the cord and simply don’t watch TV. If interested in the game they want to be able to follow it while interacting constantly through multiple social media platforms – some of which themselves want a slice of the action and are wading into the sports media rights arena.

And by the way, something else is happening with the manner in which the younger generation consumes media and interacts with the world – as discussed in a fascinating presentation by Dirk Ziems of concept m at the SVG Sky Sport Summit in Munich last May.

Ziems noted that while digital natives are living their lives online now – which we all know – their concept of themselves as beings is inextricably bound up with that internet interaction. Their validation of self now comes not from any real-world activity or achievement, but through the approval they receive from others online.

They don’t visit a tourist attraction to appreciate its beauty or historical significance but rather to place themselves in front of it in order to capture their own image on a smartphone so that they can receive more likes from friends. They don’t attend a sports event to enjoy the atmosphere and the competition in a collective environment but instead to feature themselves within the stadium and to interact with others on social media — rather than being there primarily to watch the game.

Something along these lines is the driver behind the incredible eSports phenomenon. Young males 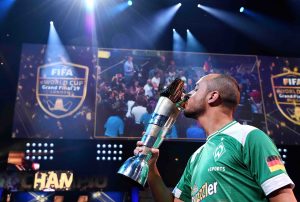 FIFA eWorld Cup 201: How do the big eSports companies expand the experience to reach potentially millions more live viewers who are not at the venue? (Photo: FIFA via Getty Images)

(and yes they are nearly all male!) pay good money to go to a sports stadium and participate in a live event. Except it’s not a ‘sports’ event. And the game is not real. It’s electronic. Digital. Online.

But here’s the twist – and this is where SVG Europe comes back into the picture. With stadiums around the world now packed out with young males watching other young males play video games, how do the big eSports companies expand the experience to reach potentially millions more live viewers who are not at the venue?

By combining their in-game expertise, in terms of navigation and storytelling, with the ‘traditional’ expertise of television broadcast production companies who can deliver multi-camera live sports events of the highest editorial quality.

No matter how signals or streams are to be delivered, where and to whom – and how much disruption there may be along that path – live content creation that tells the story of an unfolding sports event still needs a production team experienced in planning and capturing that content for a mass audience.

It turns out the eSports operators still need TV OB girls and guys with trucks! And while there is absolutely no question that remote production, artificial intelligence and virtual reality will continue to change the way live sports broadcasting is achieved – and we know the pace of that change will evolve significantly in the next couple of years, as climate-change and work/life balance pressures increase – the community of people producing sports around Europe will remain absolutely central to the business, as disruption and innovation occurs all around.

In this maelstrom of disruption, clear communication is required in order to help industry actors understand the changes going on all around them so that they can do their jobs better.

Our job here at SVG Europe is to report the news on our newsletters as it breaks around Europe and beyond, through our in-house editorial team and our network of correspondents. Getting behind the scenes for our ‘Live From’ reports from major sporting events around Europe is the most important single driver in this continuous effort.

Our role is also to share information and innovation, through our events and initiatives – most especially the four flagship pan-European events, Football Summit (February), SportTech (May), Sport Production Summit (September) and FutureSport (November).

But above all our task – or our constant aspiration, certainly – is to anticipate new directions for the sports video business, in production, operation and technology. Anticipation brings insight and understanding. Anticipation requires constant dialogue and access – between our team and sports broadcasters, rights holders, production companies, OBs, service providers and technology vendors.

No one will argue that the future for this business contains disruption and change: but it is going to be an exciting ride, that’s for sure. Please help us to continue that essential dialogue so we can provide clear communication – and hopefully a degree of anticipation – in the year ahead.