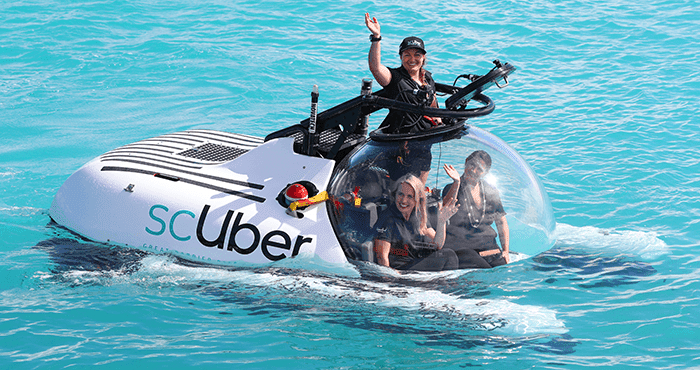 EditShare’s live production workflow solutions were used to help capture the campaign’s maiden voyage and share the 4K content across broadcast and digital channels in realtime, giving the global public the opportunity to experience the magic of the Great Barrier Reef, Australia’s largest and most valuable natural asset, at depths of up to 30 metres, with 180-degree views.

Michael Branagh, group Executive Marketing, Tourism and Events Queensland comments on its impact, “The scUber campaign aimed to reset the story of the Reef and grow positive awareness in our key western source markets. We were able to achieve $130 million in advertising space rate from a KPI of $40 million through earned media alone by a combination of efforts across PR, social media, one to one media engagement, all while leveraging EditShare’s flexible media production technology with 95% of all stories on message and positive.

“The campaign resulted in three times more positive social sentiment of the Great Barrier Reef. Further, early indications show that the positive impact of scUber has led to an uplift in bookings and an increase in intention to visit Queensland from the long-haul markets. Being able to share such visually compelling content in real-time around the world contributed to the success we achieved with this campaign.”

“Heron Island is a national park and bird sanctuary and an incredibly challenging place to do a technically intricate production like scUber.”

McNeill explained the nuances of producing a large live event from a remote location, “Our charter was to create an infrastructure that could capture live feeds in both HD and 4K from inside the scUber and make that content immediately available to two distinct groups, creative teams and journalists. Heron Island is a national park and bird sanctuary and an incredibly challenging place to do a technically intricate production like scUber. There was very limited infrastructure and no cellphone reception. We had to bring everything in.”

McNeill continued, “With the benchmark being immediate global awareness and publicity, it was crucial for both the creative teams and journalists to have access to the content to prepare and distribute marketing packages and news stories in real-time in their required format, whether they are accessing that content on the island or from a creative office or newsroom located halfway around the world.

“EditShare gave us the live production media foundation to reliably facilitate content flow for both 4K and HD formats from scUber to the various stakeholders with embedded production tools to collaborate on creating marketing packages and press kits very quickly.”