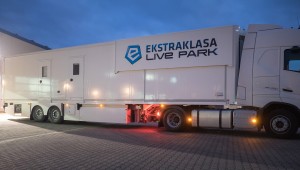 Ekstraklasa Live Park, the broadcaster for the Polish Football Premier League, is live in production with its new production tool – a Streamline S12 OB Van, delivered by German system integrator Broadcast Solutions. The 12-camera OB Van was delivered in the first quarter of 2016 and has been in production for Polish football league Ekstraklasa. In cooperation with NEP Sweden (former Mediatec), Broadcast Solutions built and delivered the truck to Ekstraklasa Live Park within a tight three month timeframe from order to delivery.

For Ekstraklasa Live Park the Streamline S12 is the first OB Van owned by the company directly. Marcin Serafin, COO with Ekstraklasa Live Park, said: “We were looking for an experienced company which can guarantee top level quality. As Broadcast Solutions produced a lot of OBs in the last couple of years and the quality is proved by other clients we decided to work with the company.”

The truck saw the integration of a sophistic control system with equipment from the likes of Lawo and Riedel that offers Ekstraklasa Live Park the maximum flexibility during productions. Additionally the OB Van offers a full network based embedding/de-embedding/frame-synchronisation system.

On board are 11 Grass Valley cameras, two Grass Valley high speeds and two Goal Cams. The video switcher is a Grass Valley Karrera K-Frame S, with routing by Imagine Communications and three Sony vision control monitors (the remainder being NEC). There are two EVS XT3 servers on board, along with Lawo VSM control and a Lawo Nova73 audio matrix. Wireless talkback and intercom systems are Riedel Artist and Riedel Mediornet.

This Streamline truck is dedicated to Ekstraklasa games. It will be used for more than 100 football game productions per year. Additionally the company will also produce galas, concerts and further sports and special events.