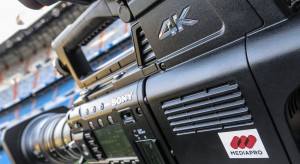 Emili Planas, Mediapro, operations manager, says that the Ultra HD production of the LFP (Liga de Fútbol Profesional) El Classico match last Sunday between FC Barcelona and Real Madrid went very well as 12 dedicated personnel worked on the two-camera production that had Sony PMW-F55 cameras with PL 19-90mm and a 86-300mm lenses located on the platform alongside the HD camera 1 and 2 positions.

“At Mediapro we want to continue to be at the forefront of technological innovation and an event with global impact was the perfect place to start tests of 4K production,” says Planas.

The production was the first step towards not only producing but delivering Ultra HD La Liga coverage later this year when the 2014-2015 season begins.

“We’re very happy with what we learned and right now getting experience is very important,” adds Planas. “It’s pretty clear that both HD and Ultra HD technology will have there own narrative and production strategy. And it is at experiences like this that we can learn how to build new forms of expression.”

The Barcelona-Madrid trial follows Sony’s tests of 4K during the Confederations Cup in Brazil last year and ahead of its returning to the country during the summer for the World Cup, where the Final will be shot in the higher resolution format.

This was not Mediapro’s first 4K event as it recently produced a tennis tournament in Doha in 4K. Lessons learned there included how to make use of the 4K material not only within the 4K production but to also have the HD team access the signals for 4K zoom replay and also storing the content for future post-production needs.

“For the live 4K production we are currently testing equipment from different manufacturers although in some product areas there are not many options,” says Planas.

One of the issues with respect to future 4K efforts is meeting the expectations of viewers who are used to productions with plenty of HD cameras.

“We believe that most viewers expect to see a production level that is very similar to HD productions,” explains Planas. “And obviously right now to do a production with more than eight cameras and with high-speed cameras in 4K is not economically viable. So in this first phase we have to settle for watching games in 4K with fewer resources.”

“We are convinced that the 4K technology, like any technology, will have a price curve that will increase the amount of equipment and the level of production for each production in a short amount of time,” he adds.