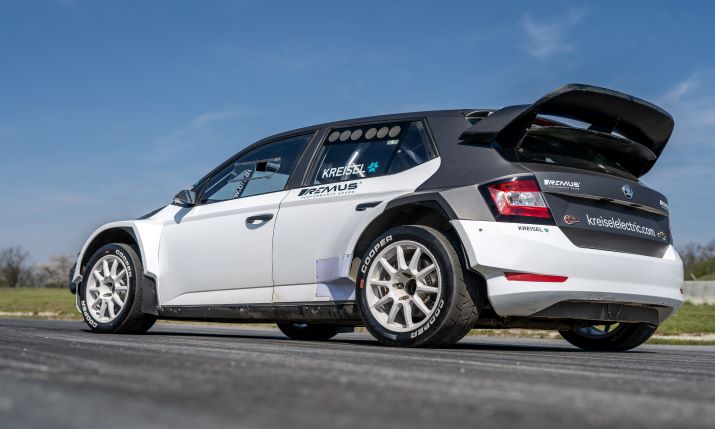 WRC Promoter is all set for a year of transition to electric in 2022 with FIA World Rallycross Championship (World RX). It took over the rights to World RX this year from IMG, adding to its portfolio which includes World Rally Championship (WRC).

Part of the rights deal for World RX included the FIA European Rally Championship (ERC), which is now part of a five-tier sporting pyramid for rallying, creating a talent feeder factory up to the WRC.

World RX is a very different kettle of fish compared to WRC however, being raced on a closed circuit rather than out in the wilds, as WRC is. Yet Florian Ruth, WRC Promoter’s senior director for content and communication, told SVG Europe there are plenty of synergies between the two.

“We see very big potential with the new electric era. I think this sport really can be one of the most fascinating head to head racing series out there”

WRC Promoter is looking to cross-pollinate between the WRC, ERC and also World RX, merging and introducing fan bases, and bringing production levels for World RX and ERC to the standard of WRC.

On World RX, Ruth says that because of the closed race circuit format, the broadcast production is much simpler than for WRC, which covers vast distances in diverse and rugged countryside around the world. However, he adds: “It’s easy to make it good, but it’s a big challenge to make it very, very good. I hope people have seen this season that we really put a lot of effort and dedication and a lot of creativity into making rallycross appealing for the hardcore fans, but also more appealing and more understandable to a wider audience.

“That was our whole broadcast concept and our whole broadcast philosophy this year,” he continues. “We want to bring rallycross to people who might have not seen it yet, or not understood it, or not have been that deeply involved in rallycross up till now. So that’s about how we cut rallycross, how we produce it, how we explain it and how we put our features together, and how we’ve designed the graphic package. We need to make it understandable and we’re trying to bring these people into rallycross, especially for next year where we’re going completely electric where we’ll target not only the existing, but also a completely new audience with graphics and more.” 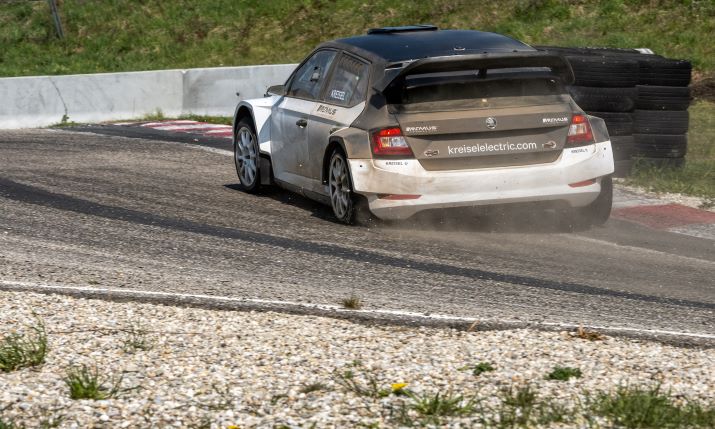 “The acceleration of this car and the performance of it is just incredible. We think that electric is the future of this sport; the battles we’re going to see!” says WRC Promoter’s Florian Ruth

Previously, World RX events were made available as a one hour broadcast only. Now it is available on RX+, which launched in summer with All Live content, as well as premium and archive content for a monthly subscription fee. Around rallycross events viewers can watch a 12 to 15 hour live stream.

“The broadcast concept – what we launched for WRC, with WRC+ and the All Live project – is now four years old,” says Ruth. “In 2018 we produced for the first time every stage, every minute, everything live at the WRC. We have reproduced that same system for the World RX – the RX+ OTT platform – to broadcast everything live. So you have a studio inbetween to broadcast behind the scenes, in the paddock and from the teams and so on, so the whole vision for this event is the same as for WRC; to have the final – the peak of the event – a live one hour broadcast, but everything else as well. What happens beforehand and after we offer the fans also.”

RX+ is receiving interest from broadcasters, says Ruth, who adds: “We’ve received some very good feedback on RX+ from the fans and from the broadcast market who are very interested and are looking into it because it’s a new product. They can take it as a live feed.”

Ruth adds: “It took a while for all the broadcasters and the media industry to understand our concept for WRC+. But now we’re there and we have a big number of broadcasters taking the All Live WRC+ product. Now we’re doing the same for World RX. There’s a lot of broadcast hours and that’s very interesting for a lot of different broadcasters.”

This year fans of World RX have had to get used to the idea that they now have to subscribe to RX+ rather than watch the one hour race stream for free on YouTube, as they had become used to before WRC Promoter took over the commercial rights to the series.

However, says Ruth, they are enjoying the added benefits of the new streaming platform. “The service and the offer they get for this [subscription] really convinced fans. Obviously some were critical in the beginning, but now they understand we offer more; it’s more behind the scenes, it’s more analytical. They can have it all on demand as well, and for the first time we’ve also bought in onboard cameras on demand, so fans can compare their favourite drivers from different angles and compare the heat and rewatch the heat from the angle they want, and that’s an asset that the fans really appreciate, and we have had tremendous feedback.”

This year WRC Promoter and its technical provider, NEP, rolled out new onboard cameras and racing drone cameras for new World RX viewing angles. While WRC Promoter needs its whole RF crew on site to manage the onboards and a specialist partner to run the drones, the drone replaces the need for a helicopter camera at races, so lightens the sustainability footprint considerably, and the new camera angles are sending fans into places never seen before.

Marko Viitanen, managing director, head of production at NEP Finland, comments: “A big change is in World RX because we have introduced a brand new multi-angle onboard, live basically from as many cars as we wish. If you look at the output, I think in World RX, the actual introduction of the new system has really given a lot to [the broadcast of] that. Florian, with his contacts, bought in the race drone to follow the cars on World RX, so with the combination of the onboards and the race drone, I think that sport has taken major steps forwards.”

“The performance of electric cars is perfectly made for those short World RX races. The amount of laps and the amount of kilometres [the cars do] works with the amount of charging time needed; it exactly fits just to this sport”

The onboard cameras, which are an evolution of those developed for WRC since 2018, the latest edition of which is called Orat II, have been developed inhouse by NEP and provide live feeds.

Says Viitanen: “The World RX onboards are basically something that we have developed over the years in WRC that we’ve made a track racing-suitable, bespoke version of. In WRC you have the car in the stages for hours and you don’t see your kit but in rallycross it’s like three or four minutes and then you see the kit again and you can do adjustments.”

The new onboards provide the director with views of all four onboards simultaneously, “and we can embed all the data from the cars with the system,” adds Viitanen. “So any data that the teams give us in the car, we can bring [that in] and make into graphics for viewers,” Viitanen continues: “When we get all the angles [from the onboards delivered] at the same time, the director can choose to cut from the face of a driver to a POV or a rear end of the car, or whatever. That’s a big thing for storytelling because you can actually have two cars chasing each other on the track and you have all the multiple angles, and then you have your track cameras and your drones, etc. But the new onboard cameras have actually gone viral for the sport. It’s really worked out.” 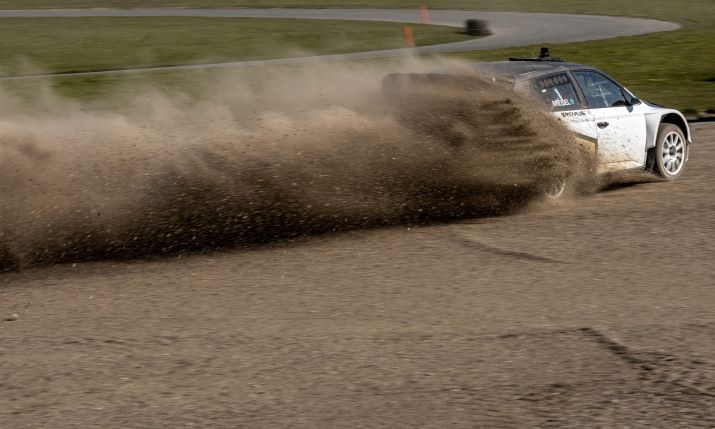 For the 2022 season World RX is going fully electric, fulfilling wheels that were set in motion in 2018 by FIA. This style of racing is perfectly suited to fully electric vehicles, notes Ruth. “It just really fits the sport,” he says. “The performance of electric cars is perfectly made for those short World RX races. The amount of laps and the amount of kilometres [the cars do] works with the amount of charging time needed; it exactly fits just to this sport.

“The engine we’ve now selected is absolutely the perfect weapon for this sport, because the acceleration of this car and the performance of it is just incredible. We think that electric is the future of this sport; the battles we’re going to see! I think this will help to bring the sport to the next level.”

Going electric will revolutionise World RX, Ruth continues. “[The revolution] is a combination of a variety of things; it’s the performance of the cars, and also the design of the tracks, and some adaption of the rules. So all this together will be revolutionary. We see very big potential with the new electric era. I think this sport really can be one of the most fascinating head to head racing series out there.”

He adds: “I think at rallycross that’s an essential element for us to redesign the tracks [for the new all-electric vehicles], so the drivers can get more out of these cars, and make it even more exciting for fans. Overtaking I think is the absolute essential part of this sport; you don’t want to see five cars or six cars following each other. No, you want to see the battle! You want to see the overtaking. So you want to see strategies and you really want to see the fights.

“With the electric cars where you have such an acceleration capability, and also if you’re a bit behind but have the better strategy, then it all comes down to the tracks and the better choice of line. Especially at rallycross, I think there are a lot of aspects where this can be really, really interesting with these new cars.”

Speaking of fans, the rallycross community is a large, active and passionate about their sport. As such, they have voiced concerns about what going electric will do to World RX, but Ruth is sure that once they see what these cars not only are capable of, but what they will allow to do drivers to do above and beyond what was previously possible, they will love it.

“We know when [fans] see the performance [of these cars] and when they see the racing, they will be convinced. It’s very hard to convince them upfront with concepts, but we are absolutely certain when they will see those cars they’ll understand.

This all-electric profile, alongside World RX’s short and fast racing format, will all aid WRC Promoter in bringing new, younger audiences to motorsport. Comments Ruth: “Absolutely we will get new viewers who are interesting in sustainability. Sustainability is a topic for us as a promoter and it’s also in line with the guidelines from the governing body, FIA, to be carbon neutral by 2030 for all their championships; a clear plan to a sustainable future.”

The broadcast of World RX is also going green, as part of WRC Promoter’s overall efforts in this area which includes conversations with partners to create sustainable service parks and paddocks. Right now WRC Promoter is working with its OB partners to reduce travel distances, and bringing in local crews rather than flying staff across the world, working in tandem with the sport itself going electric.

Concludes Ruth: “For World RX it just makes sense [to go electric] because those cars, with the performance and the duration of the tracks, and especially the acceleration that the electric cars have, is perfect.”

We can expect to see a lot more on World RX in 2022 as it continues on its new, green, journey.