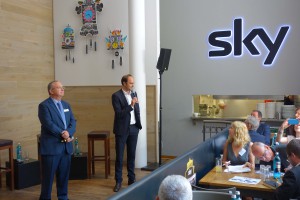 The Champions’ Summit in Berlin – which was produced by Sky in association with SVG Europe and featured Blackmagic Design as event sponsor – was characterised by much discussion of the new UHD format as well as Sky’s camera tracking system that combines virtual and actual images in real-time by sending the data to the 3D server.

The impact of advanced technologies such as IP-based production and remote production on the broadcast industry constitutes a key issue for content creators, technical providers and TV stations. The opportunities that come with the change when broadcast goes IP are promising, but there is some feeling that the industry is not yet ready to move completely into the IP world.

“What is the advantage for the customer when broadcast goes IP?” asks Markus Osthaus, CEO of the service provider TVN Group. “The production will become cheaper and benefit from a broader range of technical opportunities, but the advantages are not reproduced yet.”

After the last IBC and NAB he planned to build a first IP-based OB van in 2016, but this ambitious project was ultimately put on hold. “There is no common standard,” underlines Osthaus. “As long as there is no continuous production workflow, it remains unclear in which direction the standard is going to develop.”

“The whole industry will change tremendously in the next four to six years,” says Daniel Url, CEO at German system house Wellen&Nöthen, who is convinced that an IP infrastructure will fundamentally affect the production costs. “Standard technology is cheaper; there will be less cable connections and lower weight in the OB and we can do multicasting.“

Video processing will be replaced by a software-based infrastructure and the production units will become more flexible. “IP is an issue for us but we also focus on the virtualisation of servers. A hundred servers are replaced by one single rack and a play centre,” says Url.

A lot of content will be moved into the cloud and IP is forcing this development. Broadcasters might even create their own cloud. “The industry is about to change but the investment cycles won’t because an IP-based back-end doesn’t require [the rebuilding of] the whole TV station.”

According to Thomas Riedel, CEO of Riedel Communications, it takes seven years to pay back the costs of an OB van. “In this business there are only tiny margins,” he says. The migration from HD to an UHD infrastructure is easier if it is IP-based, while true ‘connectivity’ means the ability to have access from anywhere in the network.

But it might become difficult to connect the broadcast community with the IT crowd. “In the US, they even have separate unions which don’t allow that an IT expert configures an IP cable,” notes Riedel – but the bottom line is that the shift to IP has started and there is no way back.

In terms of remote production, there is a common consensus in the broadcast industry that this is more or less already happening. “Remote production can save you a fortune,” says Colin Cradock, COO, Production Associates. “For instance, on our biggest OB van there are five to six engineers but when we do a remote production, we need only three.”

Robert Kis, CEO TV Skyline, considers flight-boxes as a good alternative to a mobile OB van. “For our production in Asia we had the requirement to provide the same equipment as in Cologne,” explains Kis, “but we brought everything in boxes. We had an OB van without any chassis. But for a single event it is more efficient to use an OB van.”

For Philipp Lawo, president of Lawo AG, ‘remote production’ is nothing new at all but instead serves as a buzzword. “IP gives the remote production a strong boost,” emphasises Lawo. The network infrastructure keeps growing so that it becomes possible to connect almost any type of location. An IP-based infrastructure with stages boxes might not be used for the ‘crunch’ encounter of the Bundesliga, but for smaller projects such as handball this is definitely a possibility.

Summing up, Ludwig Schäffer, CEO MTI Teleport, adds: “Canada already proved at the Olympics in London three years ago that this is technically not a problem. We are on the move of a huge change. There will be a lot of technical opportunities when the IP [approach is] available for the remote production.”