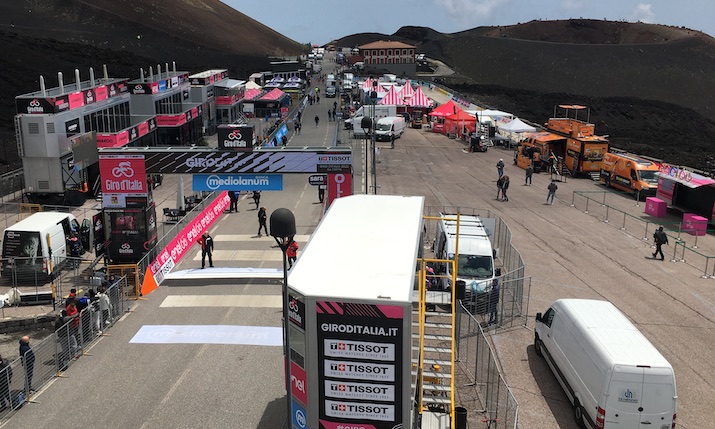 While the Giro d’Italia has traditionally been produced by Italian national broadcaster RAI, this year marked the first event where EMG was in the hot seat, handling everything from editorial management to logistics and more in between. Earlier this year, event organiser RCS Sport chose EMG as its broadcast production partner for all the cycling races in its calendar, kicking off with the Strade Bianche road race in March, followed by the multi-stage Giro d’Italia 2022, which ran from 6-29 May.

“To give an idea of ​​the optimisation effort and the complexity of the organisation, last year RAI engaged 405 employees for this event, while this year we at EMG fielded only 129 professionals.”

For the first time, RCS Sport has entrusted a private group to produce not only the Giro but all the UCI World Tour races it organises. The three-year agreement with EMG not only covers technical production of the event, but also involves EMG supplying technical personnel, in this case director Angelo Carosi and two assistant directors, Franco Scotton and Antonello Grippo. 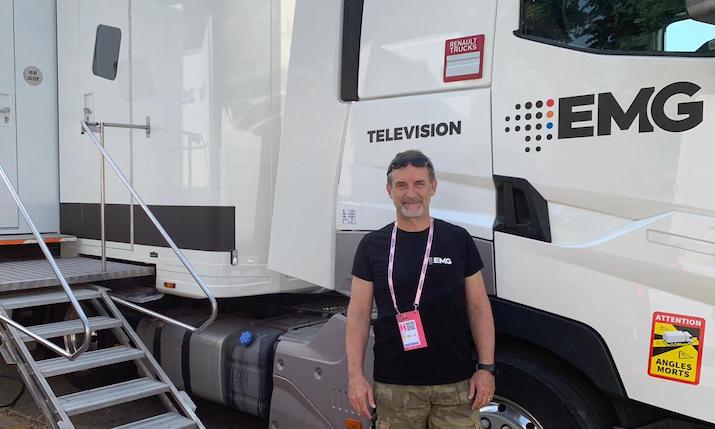 Furlan continues: “The production of the first Strade Bianche race was organised by us at EMG Italy in record time, 15 days, and then we spread that production model on the Giro, using two types of production in response to the requests of RCS Sport’s technical specifications. Standard A involved two planes, two helicopters, 10 motorcycles and 14 fixed cameras on field at arrival, while standard B, for ‘minor’ races, features one helicopter, one plane, five motorcycles and 12 cameras on field.”

Standard A provides for two Beechcraft B200 radio link aircrafts, equipped with 14 autotracking receiving antennas and two transmitting antennas: these are the fulcrum of all radio frequency flows that are managed for live broadcasting.

The use of autotracking antennas allows for optimal gain and a stable signal path both up and down: each receiving antenna moves and follows the antenna that transmits and/or receives on the ground, despite the fact that both the plane and transmission points are constantly moving.

The signals get to the TV compound via an RF truck and, at the same time, are received at an intermediate point which acts as a reserve, given that some stages cover very long distances.

In these stages the coverage cone needs an intermediate reference point, where an EMG France 13.5m SNG OB van, equipped with complete reception and transmission systems and assisted by a power generator, sends the signals back to an intermediate mux (for example, in the case of the Reggio Emilia stage the mux was in Asiano Piacentino).

The standard A tour utilises two helicopters, a B355 and a twin-engine B355S, operating at altitudes ranging from 100m to 300m and equipped with Cineflex HD cameras. They are used to convey the story of the race but also to film the beauty of the Italian landscape.

On the ground, for sportscasting, five motorcycles are equipped with Grass Valley LDX86N compact cameras and Livetools RF transmitters, created on proprietary EMG engineering. All signal transmission and reception systems are engineered by Livetools, the R&D division of EMG.

The story of the race

As experts in sports shooting, EMG provides super-specialised personnel: all bike drivers and all camera operators are former cyclists, some even champions, and this added value is clear in the type of shots they manage to capture for the director.

In total for the Giro, EMG supplied 10 moto-cameras including those requested by the broadcaster rights takers for integration with moving images or audio. 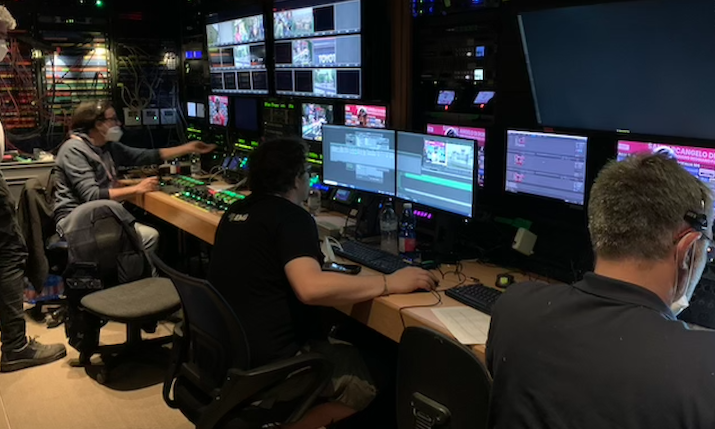 A team of just 129 worked on the Giro for EMG

For example, RAI hires four motorcycles, two for RAI Sport and two for RAI Radio, to deliver live content during its personalisation broadcasts. Eurosport also integrates its own AV signal, thanks to another EMG bike that allows audio commentary, but also offers video, thanks to an onboard camera that frames the journalist while they intervene live in the race.

All these moving signals, including those of the two helicopters, reach the plane and then descend to the TV compound.

Inside the TV compound

For management of the TV compound, EMG fielded the 16.5m Orion 209 OB truck as its main gallery. An EMG France truck, Orion C42, took care of the reception and distribution of signals.

Inside, Bruno Coudyzer, manger EuroLinx at EMG Belgium, dealt with the RF signals, including the N-1 to and from journalists moving on the motorcycles. The number of passing signals is truly impressive. Even the telemetry of every plane, helicopter and motorcycle that moves along the route is constantly displayed and co-ordinated on a live map.

This allows the team to know exactly where the vehicles are on the route and is used by those who co-ordinate the filming to indicate the positions of the cyclists to the various bikes and therefore provides valuable information to the director.

“In general,” continues Furlan, “the co-ordination and management for RCS Sport of all the low frequency is by EMG Italy, while all the radio frequency setup on the go is handled by EMG France, EMG Holland and EMG Belgium.

“This year the Giro started from Hungary and EMG Group sent a technical team from EMG Belgium to be on site to follow the first three stages. At the same time, the group made up of EMG Italy and EMG France moved to Sicily because, otherwise, it would not have been possible to create such a complex setup with just one day of travel between Hungary and Italy.” 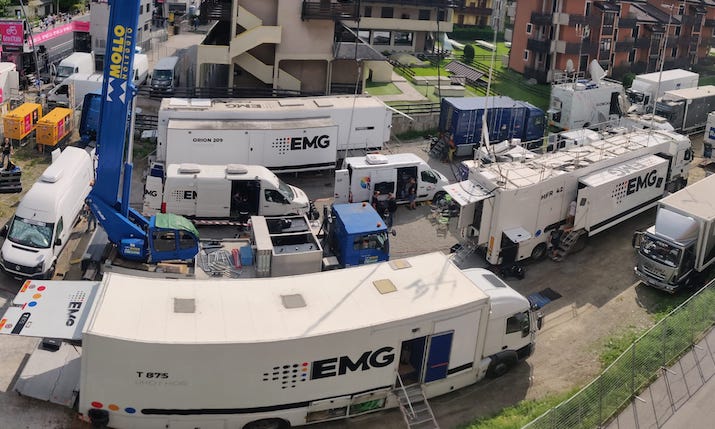 EMG Italy also organised the logistics of all 129 people involved in the Giro who moved throughout Italy, with all the issues related to time and different locations.

Around 70 hired personnel were distributed throughout the TV compound, including a dozen in the intermediate relay group, about 30 at departures and eight in the group between airplanes and helicopters.

Furlan underlines: “We have integrated the technical specifications with a backup system for transmitting images from helicopters and motorbikes in case of extreme default of the planes, that is for conditions in which the planes cannot fly – as has happened in past editions.

“In fact, all motorcycles and helicopters also have 4G backup transmission systems on board; therefore all the signals, including those from the plane in radio frequency are transmitted simultaneously on the 4G links to ensure on-the-air transmissions without interruption, in any case, in any adversity. Upon arrival in all TV compounds there is an internet connection dedicated to this use.

“Other technical innovations have not been introduced – for the moment – but, given the high complexity of production, EMG is already thinking about some innovations to be introduced for the next edition, after having demonstrated in this one the quality level of the entire organisation.”

The responsibility of EMG Group also included management of the TV compound, including fulfilling the requests of the broadcasters, such as the supply of electricity, spaces, parking, etc.

Similarly, Eurosport, which created a lineup on arrival at each stage with two journalists and radio cameras and added an SNG vehicle in the stages in which it also shot video in the race with a motorcycle, and Swiss broadcaster RTSI, which joined after a few stages for customisation, created space challenges in the TV compound, which was around 2,000sqm for each stage of the Giro.