Following the news that RCS Sport has appointed EMG as its broadcast production partner for cycling, the pair have continued their co-operation with the successful delivery of the Giro d’Italia, which took place last month. EMG was called in to manage the production of the event, including editorial management and logistics. Beginning on 6 May in Budapest, the three-week Giro d’Italia finished in Verona on 29 May after 21 challenging stages.

“For us it is a great responsibility that also covers the whole package of the nine races in Italy. To do this we have put in place a partnership between EMG in France, Belgium, Holland and Italy, and we will carry out some experimentation”

All the logistics were handled by EMG Italy, led by Davide Furlan, special international events director and overall project manager of cycling, EMG Italy, along with Valentina D’Alìa, booking logistics coordinator of the TV compound and known as “the one who slept the least of all!” as she managed a team of 129 people across each stage of the race.

As D’Alia explains: “My task was to co-ordinate the booking crew for the logistics of the entire operational group made up of Italians, French, Dutch and Belgians. All the logistics, finding hotels close to the hot spots, the organisation of catering, moving all the staff, was a gigantic undertaking, for a product on the air from noon to 18:00 for each stage, for a total of 106 hours of live coverage.”

Across the event, some 6,764km was travelled over 27 days; 1,958 hotel rooms were booked, excluding air crews and helicopters which accounted for another eight to 10 people; 20 drivers with 20 minivans were used for the caravans that transport all staff to the hotels; 1,548 meals were catered between arrivals and departures; and 60 hours of night surveillance were conducted.

Fabio Guadagnini, EMG Italy CFO and project manager on the Giro, who was tasked with coordinating the French, Italian, Dutch and Belgium groups, comments: “RCS Sport made a strategic and also very courageous choice, and will rely on EMG Group for three years, becoming the organiser also for the production part.

“For us it is a great responsibility that also covers the whole package of the nine races in Italy. To do this we have put in place a partnership between EMG in France, Belgium, Holland and Italy, and we will carry out some experimentation.

“In these first editions [starting with the Strade Bianche road race in March and the Giro] we did not have much technical time because we were too close to the start of the competitions [when we were appointed], but we are already working on a strategy for the next few years where we will propose new adventures together with RCS Sport, which is a very receptive interlocutor and for us this is a big thing.

“We therefore decided to put on the track the best of what the group can offer at European level for cycling: our great technological knowledge, starting from RF services and the management of EMG Belgium, Holland and France signals, and our expertise of the territory, in addition to the management of technical means and OB van production which is largely managed by EMG Italy.” 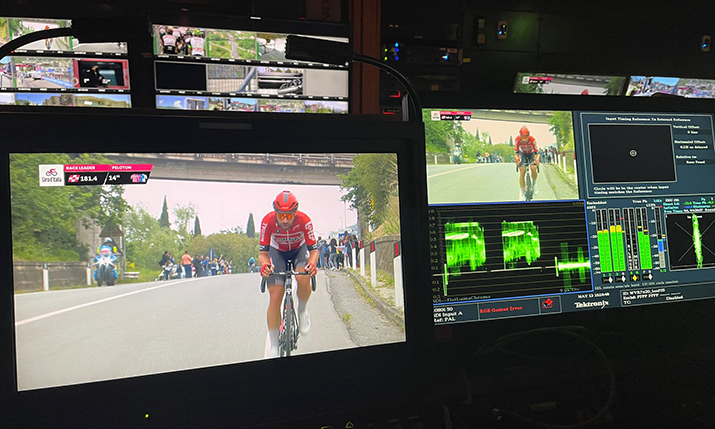 For this edition of the Giro, EMG employed and combined a range of international expertise, marking the first time that the group has brought this intercompany joint venture into the field on such a complex project.

Guadagnini adds: “It was a very important challenge that we faced with great commitment. We were aware that we could never let our guard down; telling a sporting performance over 200km to 270km in five or six hours of live coverage brings many risks and dangers.”

According to Bruno Coudyzer, manager EuroLinX at EMG Belgium, “it wasn’t difficult,” but rather, “a great challenge”. He goes on: “Each country and city where we stopped had its own difficulties: it is enough to look at how large the TV compound for international and national feeds was, to understand that we had to face very demanding and very different logistical, technical and practical complexities and solutions.

“While in the ‘flat’ stages, such as Reggio Emilia, the management is simpler; in the mountain stages we have less space and leeway to make everything work. Here the intermediate team is instrumental as mountains often block the line of sight propagation for RF signals to pass through.”

“We lived 30 days of great enthusiasm with a strong search for technical sports details, details that had been lost in the past, despite the absolute competence of RAI, and that the cycle-amateur loves to see, all with great quality 1080i images, therefore with an excellent signal”

The set up for the Giro is similar to that of the Tour de France with 10 bikes, including five for the unilateral RAI, some for the audio commentary and one for Eurosport, as well as the use of helicopters.

“In addition to the two in flight we had a third helicopter on standby and also a second plane – always in standby – which is used for the so-called ‘queen stages’ and ‘long stages’,” adds Coudyzer.

“I really couldn’t calculate by heart how many RF channels we used, but in terms of frequencies in use there were about 80, not only for video but also for communications and data, since intercommunications are key in such a mobile set up.”

The bulk of the RF equipment came from Livetools, a proprietary brand within EMG, which has its own research and development areas and which produced the Fusion platform.

Transmitters, receivers, software and additional hardware make this huge set up possible over long distances and allowed the team to coordinate the use of all the frequencies involved.

“We transmitted and received all the signals through different Fusion components that allow links, even of 120km, up to aircraft operating between 6,500 and 8,000 meters of altitude, as well as 12 sources to be transported and myriad audio video channels and data,” Coudyzer says.

“Given the importance of radio frequency signals, we engaged two planes because one was always ready as a backup to avoid any interruption; moreover, in some particularly long stages where the flight autonomy is exceeded (about 6.5 hours), the second plane can take over in overlap.” 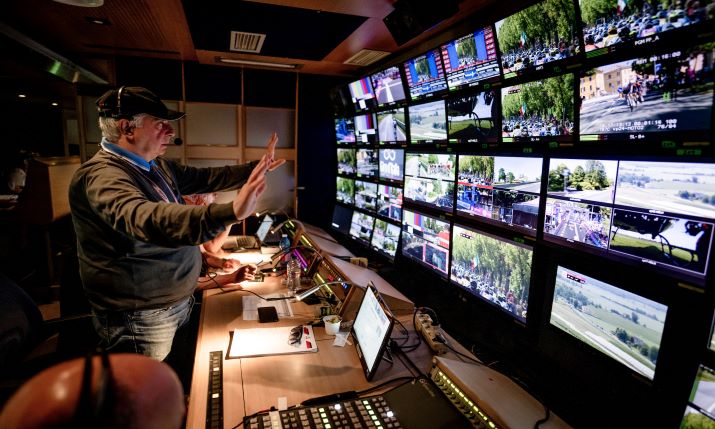 Angelo Carosi is the lead director on Giro d’Italia. EMG is utilising its plethora of broadcast technologies and the reach of its expertise across Europe to create an innovative production for RCS’s first Giro d’Italia as host broadcaster

A passion for cycling

Angelo Carosi, director of the Giro, says: “What we have shown here in Italy is not only the best of television technologies on the market but also, from an operational point of view, it is the best team anyone can ask for. Even motorcyclists and camera operators are super passionate, often cycling champions, and this can be seen in the result of the images on air.

“We went in search of aesthetic details and the most important directorial novelty is the discovery of the Italian territory, thanks to the production of EMG for RCS Sport, where our commitment was to create the right combination between the sporting spectacle and the territorial one.

“We are very lucky because, unlike other nations, we have a variety of landscapes that allow the country to be enhanced on a tourist and spectacular level.”

Directing the Giro is a rather complex operation which, apart from the sheer technological grandeur, involves a huge effort on behalf of the people who have to assemble and disassemble everything in a few hours.

“Those who see the race on TV do not realise everyone’s physical effort: we have to cover a six-hour live broadcast for almost 30 days,” explains Carosi. “Personally, among the many challenges faced in my career, this is a new one and it is the first time that the Giro d’Italia has been produced by an external company rather than by national broadcaster RAI. 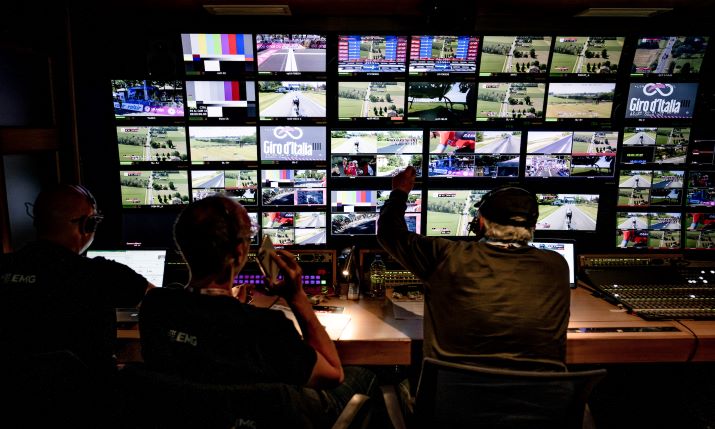 “The guys who work with me are all very charged and passionate and it could only be like this, otherwise we would not have reached such an effective formula in a very short time, also confirmed by the praise of the international takers who pick up the signals.

“The staff hired by EMG are of the highest level. The winning choice was also to rely on an international dimension, involving internal enthusiasts from EMG Belgium, France, Holland and Italy, and supporting people who have a high level of know-how.

“We lived 30 days of great enthusiasm with a strong search for technical sports details, details that had been lost in the past, despite the absolute competence of RAI, and that the cycle-amateur loves to see, all with great quality 1080i images, therefore with an excellent signal.”

Carosi continues: “What emerges in the style of how we told the great story of Giro is our specificity of having prepared two parallel schedules, one that tells the road race and one for helicopters and motorcycles. To enhance the territory and the most important technical points of the race we created two different run-downs where some motorcycles and helicopters temporarily detach from the race and go to the points of interest adjacent to the track, and then reconvert to a well-identified point and resume the live race.

“This amounts to the construction of two production plans which are followed live thanks to a live graphics map in the RF truck and are decided on the basis of the initial morning co-ordination, a production meeting, which orchestrates the day as in a score for a large orchestra,” Carosi concludes.