Kicked off with first tech outing at the Orange Vélodrome, home stadium of Olympique de Marseille

Euro Media Group (EMG) acquired a startup called On Rewind, the developer of a gamified video player, one year ago. Recently On Rewind’s technology was used for the first time at the Orange Vélodrome, the home stadium of Olympique de Marseille, during a match against Nîmes Olympique.

On Rewind’s technology can be provided in two ways: either as an Over The Top (OTT) app to be downloaded from a provider; or as a club or in-venue live stadium app.

In last weekend’s case, the latter was used for live, in-stadium enhancement of the game, provided by On Rewind in partnership with Orange. 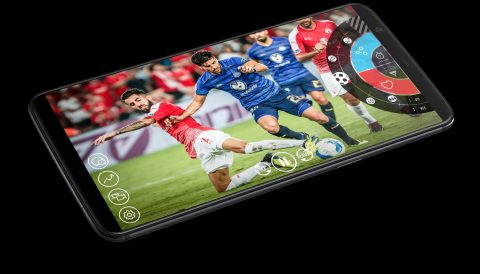 Romain Violleau, co-founder and chief executive at On Rewind told SVG Europe: “We have been working with Orange Telecom. We had to install the set up inside the stadium, both software [for the app] and hardware to do the in-stadium streaming, and we needed to use Orange’s network for WiFi.”

Prior to the Marseille vs Nîmes match, On Rewind ran two tests at previous matches open to On Rewind, Marseille and Orange staff only.

At the match on Saturday 13 April, every time an attendee within the stadium tried to log onto WiFi they were automatically redirected to either the Apple App Store or Google Play to download the Orange Vélodrome app containing On Rewind’s SDK. The mobile development of the SDK was made with On Rewind partner, Netco Sports, a sports app developer.

The first public outing of the live stadium functionality was a success, said co-founder of On Rewind, Rémi Chasles: “This was the first time we showed the app to the public. We had a lot of feedback during the game; it went really well and users commenting on the app stores all said they had a great experience. We were a bit surprised that nothing bad happened because you expect something to go wrong on the first time a new technology is launched, but it went well. It will be used for the rest of the season at Orange Vélodrome and next season.”

Violleau started working on the technology behind On Rewind in 2013, making the most of his training as a software designer to get into research and development for 18 months. The company was founded in 2015, and two years later was acquired by EMG.

He commented: “EMG was looking for a streaming provider with technology for video and live streaming. We were involved in OTT and fan engagement and all the infrastructure – content delivery network, encoding, streaming – all the things a streaming provider needs to be able to do. We are big sports fans ourselves, so we want to bring the best experience.”

The development of the company’s technology stands out from the crowd because it is aimed at younger viewers; those that are familiar with and entertained (rather than perplexed) by gamified user interfaces. Explained Violleau: “The aim of the solution is to bring something different,” stated Violleau.

“OTT isn’t a big market, but it has big competitors, so we wanted to bring more than an OTT solution to market.”

“OTT isn’t a big market, but it has big competitors, like Deltatre and Neulion, so we wanted to bring more than an OTT solution to market. We did a lot of R&D, especially on the younger generation and eSports. All the gaming industry is a big inspiration to us; all the team here are gamers so all the team knows very well how it works and what fans want because we are those people,” continued Violleau.

He added: “It’s more than about adding stats on the screen now; we wanted to add more involvement in the actual video player. We wanted to create interactive content, so we use interactive tagging so you can tag, share and comment on an interactive timeline. On top of that, we wanted to develop a user interface more inspired by drone controllers and gaming controls.

“Younger generations use their fingers to scroll, so we used R&D to develop our solution and came up with a different navigation system, so on the On Rewind Video Player there is the TimeWheel for mobile devices.” On Rewind has the patent for TimeWheel and the technology behind it, confirmed Violleau.

He went on: “It’s attractive and intuitive because it’s a wheel that turns, so just the pleasure of turning it means you’ll play with it. There are big buttons so you can share and comment, which encourages you to actually use it. For the OTT channel, it’s an interactive video player that will encourage new and younger players.”

Next up for On Rewind is the rollout of the other application of its technology, as an OTT app to be downloaded from a provider. This time it is working with the Israeli Premier League, and the application is set to be ready for the public as of next season.