Encoding, decoding are plain sailing at the Alpari World tour 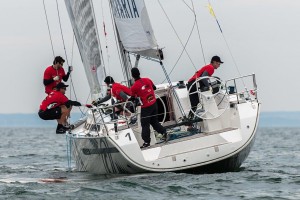 The latest encoder and decoder technology from Teracue was deployed onboard regatta yachts during the first event of this year’s Alpari World Matching Racing Tour, Match Race Germany, which took place in Langenargen by Lake Constance recently. The Teracue solutions were used to broadcast offshore live images via LTE/4G mobile networks.

The potentially groundbreaking project saw technology partners including Vodafone, Alcatel-Lucent, TDT and Teledata develop and install an infrastructure on location that allowed for live images of the regatta to be broadcast from the water, air and shore using LTE/4G. Camera signals were sent from regatta yachts, a plane and a high-shot camera placed on a jetty to an LTE base station sited on the mainland.

IPTV specialist Teracue supplied its ENC-300-HDSDI encoders, which were used to convert camera signals from the boat and plane cameras to IP. These signals were then sent to an LTE router and transmitted from there before being receivd on land. The robust nature of the encoders is said to have made them ideal for these demanding applications.

On land, the IP streams were converted back into SDI signals by Teracue DEC-30-HDSDI decoders and sent to the event direction and video mixer. From there, the live images were played and distributed to the spectators via fibre.