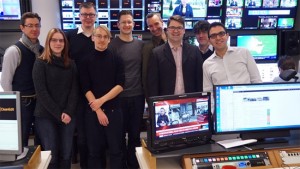 In Q1 2015, global news provider Enex contracted BCE to create a new fully HD technical infrastructure, together with a customised MAM, editorial and playout platform that would meet its growing needs. The new system was launched officially on 14 January 2016 after a soft launch at the end of 2015. The heart of the new platform is an advanced News Media Asset Management. Developed by BCE, the MAM features library management tools and advanced automation and is combined with the editorial platform (NRCS) and the playout platform under one common user interface.

The intuitive graphic user interface is designed for editorial and technical staff, displaying clear information flows while allowing for the publishing of news items in a few clicks. It is solely web-based and can be accessed by all Enex staff in the three continents that the organisation operates offices currently. The production environment also comes with an integrated editing tool with basic features to edit videos, add text, comments etc.

The solution is built around a central storage system from Harmonic, where all the content is recorded and stored. All the production tasks such as content reviewing and editing are done directly on the storage system. Two types of servers are used for the playout. Harmonic Spectrum servers are used for content recording with channel ports for advanced playout. Loop playout and announcements are made available by the BCE in house developed playout server ‘D.Playout’.

The media processing is controlled through the News MAM. By using Telestream Vantage as the core transcoding and workflow engine, Enex technical staff is now able to easily define tailor-made workflows to respond to specific requests of Enex partners. Vantage is combined with open source transcoding software in a transcoding farm — a solution that was proposed and developed by BCE in order to enhance cost efficiency and provide scalability for the future.

All the video and editorial metadata exchange between newsrooms of Enex partners is based on the BCE Newslink solution while FTP and other transfer technologies are also supported. Satellite bookings and recordings scheduling is done in ScheduALL, which was also upgraded as part of the project. BCE automation, Au2System, enables the use of ScheduAll as an ingest management system and orchestrates communication between it and the News MAM in order to automate the baseband ingest process.

Christos Schizas, Deputy Managing Director of Enex said, “This project represents the most important investment decision in the recent history of Enex and required a long investigation period and deep discussions with our key members. We are very happy to have opted for the BCE proposal and excited with the final result. What has started as a purely technical upgrade from SD to HD has resulted in developing an innovative media management and editorial platform. It is the platform that automates a large part of our daily work and lets our staff focus on value and service for our members.”

Enex has 53 full members, including Europe’s largest commercial broadcaster, RTL Group, Sky News in Great Britain, CBS in the United States and 11 broadcasters in Latin America. It organises the sharing of news packages with accompanying editorial information, live transmissions from big events and breaking news spots and location services for its members.