When you think of women’s sport on TV, your thoughts do not immediately run to netball. Sports like football, rugby and cricket are more high profile and, with their male counterpart leagues, tend to get the big rights bucks as well. However, England Netball has been working closely with Sky Sports for over 11 years now to get the game traditionally played by generations of school girls in front of a larger, broader audience to increase its profile, with new players and a professional image.

England Netball is the National Governing body for England’s biggest female team sport, with 92000 affiliated members and at least one million women playing netball every week. Almost 12 years ago the body approached Sky. It wanted netball to be showcased on TV to attract new players.

Joanna Adams, CEO at England Netball, says it was the only English national league at the time in a strong enough position to do what it did next; pay for the entire Sky production. “In effect,” Adams states, “we paid to be on TV. It was a hefty investment for the sport. But then when we renegotiated in 2013, Sky said it would pay for the production, but it would take some of our commercial rights in exchange. In 2016 we got all our commercial rights back on renegotiation, and it’s now a fully produced show that goes out on Sky. Sky has developed the production quality, graphics and analysis of games with us over the years. It’s always been a good partnership with Sky.”

The broadcaster currently shows around 23 Super League netball games per year in the UK; one per week plus all play offs, finals and international matches. However that, in Adam’s words, “leaves masses of Super League games that aren’t broadcast”. To solve that issue, England Netball is now on the hunt for an over the top (OTT) partner to work with them and Sky, with whom England Netball’s contract runs until 2020, to get those games on air, as well as increase audience reach.

However, the new OTT service has to have as high production values as Sky Sports’, Adams explained: “There is a point regarding OTT about reach, I get that. But if you put out a product that looks like it was shot at low cost, you’re not going to change the perception of our sport; we don’t want it to look low quality. If we’re creating content for netball fans, they can go and watch on Sky. We want an OTT product that changes the perception [of netball] for people so they want to come and see it, to extend our reach to non-netballers.” 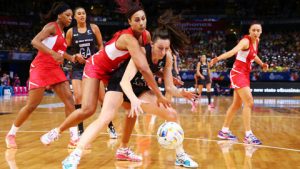 Adams states England Netball is now in discussion with Sky about an OTT service and how to do it. “There is an agreement that that’s what we’ll do. We’re going to go off to talk to OTT broadcasters, and then we’ll go back to Sky to talk to them about it. We’ve worked hard to create a product that looks great on TV, and we wouldn’t want to see the sort of [OTT] thing that’s shot on a laptop and put out; we want product quality that maintains the same standards [as Sky Sports’].”

Increasing the netball broadcastable product is key to maintaining audience numbers and pulling in new ones. To that end, in 2016 England Netball came up with a completely new concept to help drive viewers to Sky and other broadcasters; Quad Series. This is a series of three matches where England, Australia, South Africa and New Zealand play each other, creating an exciting product for air time, and giving the top athletes in the sport globally the opportunity to play each other on a regular basis.

In 2016 just Sky and the broadcasters with reciprocal rights for the other teams aired the matches. In 2017, thanks to the success of the previous year’s Quad Series, in the UK Sky aired all three matches and the BBC took one match; England versus Australia. The match was played on 4 February, also a Six Nations Championship weekend, so competition for viewers was fierce. However, Adams comments it was a great success: “Altogether 503,000 watched that game! The BBC was delighted with those figures. Apparently the BBC normally gets complaints about everything they air, but they said for the first time they only got positive comments. That is great for us. And Sky has agreed that Quad Series 2018 will go on the same format as 2017 [Sky and BBC].”

Sky is supportive of ideas like the Quad Series, Adams continues: “Without a shadow of a doubt, Sky is trying to support women’s sport. It’s a positioning statement that they’re trying to move women’s sport forward.”

Although England Netball has had support from Sky as it developed its viewership over the last 11 years, ultimately the body has been a trailblazer for national leagues, and in particular, women’s sports. Adams reflects: “If you look at other big team sports like football and cricket, they’ve got pretty good broadcast situations. Where we were struggling is we didn’t have a male game. For other sports that don’t have a big male game, but that have big domestic leagues, it can be tough to find the sort of cash that is needed to fund the production side, especially when costs are getting cut all the time.”

The benefits are worth the investment however, Adams says: “If we have a successful competition on TV, and a game is well watched, our ‘session finder’ [on our website] will go up. People will watch the game on TV and think, “Oh my god, I love that, I want to have a go!”.”

Concluding, Adams reiterates the fact that the effort to get televised, from self funded productions to successful rights fees, is all with the aim of growing the sport: “The money we get from TV funds our elite athletes and grassroots netball. It’s an enabler for us to do other things. There are lots of sports that want a rights fee, but there isn’t an endless pot of money out there [from broadcasters]. You have to prove to broadcasters that you really want to do it.”