England vs ROW squash match to be shown live in VR 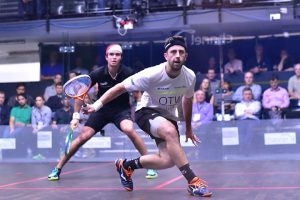 The sport of squash is to be broadcast live in virtual reality (VR) for the first time when England take on the Rest of the World in the Ab Initio International.

The VR trial will take place on Friday (24 November) at the St George’s Hill Lawn Tennis club in Surrey, produced by MOOV, the company that is also providing full HD coverage that will be streamed live by BBC Sport.

The VR output will be captured on the all-glass show court using two Orah 4i 4K 360-degree cameras and will include augmented scoring graphics and replays. It will be made available on YouTube where viewers can watch with or without a VR headset.

Talking to SVG Europe ahead of the event, MOOV director Nev Appleton revealed that the “curated” VR coverage will include live graphics and commentary.

“We’ve developed VR specific graphics applications and rendering tools that can deliver 4K stats-driven 360 graphics in a monoscopic or stereo format live,” he said. “The graphics software runs on a powerful workstation PC with Nvidia graphics cards and utilises Blackmagic Design capture cards to produce a 4K video up to 60 fps in real-time. The VR 360 live [coverage] will be a first for squash.”

MOOV will be supplying all production crewing and facilities for the event which will be played under a new set of match conditions in an effort to avoid any dead rubbers.

The ‘every point counts’ format will consist of four players per team with one match per string, resulting in a total of four matches on the night. Each match will be made up of three games with each game first to 11 points. The team score and overall event result will be calculated based on total points won by all players (see box below). 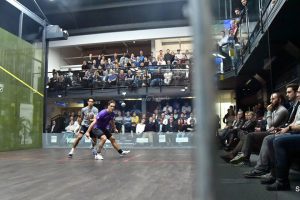 For the HD coverage, 12 cameras will be used including a six-camera remote-operated fibre system featuring Panasonic HE130 hot heads. A Boxx TV RF system will allow a Panasonic PX800 to roam across the venue for pre and post-match player interviews and analysis. An AJA RovoCam will also be included in the set-up.

MOOV will use a specially devised graphics pack and scoring interface, based on a ChyronHego graphics system, to display on-screen match data. The graphics and scores will be fed to both viewers at home and display screens inside the venue.

Appleton added: “I’m really looking forward to the evening, especially seeing how the event unfolds. We will have about 12 cameras on the night, most of which are robotic and also a new custom-built camera for the back wall.”

Streamed coverage will be shown live on the BBC website, via the BBC app on smart TVs and on the BBC Sport mobile app.

The Ab Initio International takes place from 6pm on 24 November at St George’s Hill in Surrey.

Scoring and format for the Ab Initio International in detail