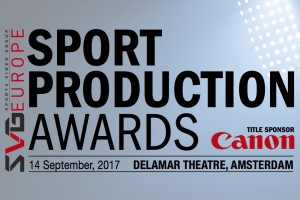 SVG Europe is delighted to announce that entries are now open for the 2017 Sport Production Awards. For the first time, the Awards will be held at the conclusion of the Sport Production Summit, which will take place at Amsterdam’s prestigious DeLaMar Theatre on 14 September – just ahead of IBC 2017.

This year the Awards are being expanded this year with two new categories. The new Outstanding Digital Achievement category will recognise achievement related to digital and social media sports content creation and distribution. Together with the Outstanding Technical Achievement and Outstanding Live Event Achievement Awards, nominations are open to any company or organisation involved in sports broadcasting.

Nominations can be made via the form here (https://www.svgeurope.org/sport-production-awards-nomination/); a comprehensive, dedicated microsite will go live in the next few days.

Also new this year is the (non-voting) Outstanding Contribution to the European Sports Production Community Award, which will be determined by a team of industry peers and given to an individual they feel has made an exceptional contribution to the world of sports broadcasting.

“We are delighted to again have the support of Canon for this exciting expansion of our annual Awards event, which as a result of the new categories and extended voting period will now provide a much-enhanced reflection of new achievements and excellence throughout the sports production world,” says SVG Europe Editor David Davies.