ESPN consolidates Wimbledon tennis operations and looks ahead to 2018 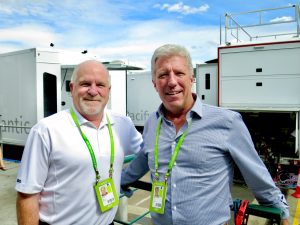 This year’s Wimbledon tennis tournament will be remembered as the beginning of a new era — ESPN’s ITV operations moved from IMG’s facility at Stockley Park to the Wimbledon broadcast centre — and the end of another: next year, the All England Lawn Tennis Club (AELTC) will take over host-broadcast duties from the BBC. The ITV service provided DirecTV, ESPN3, and the ESPN app up to six live matches at once during the first eight days of the tournament.

“Moving our ITV operation into Control Room B gives us better efficiency,” explains Terry Brady, director, remote operations, ESPN. “What it has done for the group is make content much more readily available [because] the ITV group can use the whole plant and infrastructure.”

To VP, Production, Jamie Reynolds, the real benefit has been speed and efficiency for sharing preproduced content and highlights because the ITV team can access content created for the linear network. Previously, the ITV team relied on a staffer using an EVS IPDirector to grab content and transfer it to the ITV control room.

“There is no need to wait for the next hot list to come out,” he explains, “and they have much more organic control and can be more nimble. It’s consolidation and control that makes the experience even richer, especially for the signature events.”

The ITV coverage ended yesterday, and now Control Room B is operating as a second control room, allowing the ESPN production team to use one for coverage of Centre Court and the other for Court One. On ‘Manic Monday,’ the control room was basically split in two (including the Grass Valley Kayenne production switcher) so that the ITV team could continue to offer coverage while another team covered Court One matches.

“We had three hubs working, so it’s aggressive,” says Reynolds.

Other additions to the mix include the use of the Unity six-channel full-duplex intercom system, which connects over Wi-Fi or cellular data. It has two parts: a client app that runs on iOS or Android devices and a server app that runs on a Mac computer.

Also in use are Calrec Waves plug-ins used previously in recording studios and offering such functions as compressors, EQs, limiters, and delays. And a Calrec Brio audio board allows a quick transition from one show to the next.

“It is an interesting plug-in that can do a lot of things,” says Brady. “We are using it in advance of the U.S. Open so we can integrate it more affectively there.”

ESPN is also using two types of graphic systems this year: the Orad TD Control and MVP systems and ChyronHego Paint. The goal is to get a better sense of the best ways to put both systems to use to maximise content creation.

“Both have their pluses, and the workflow changes a little bit on both devices,” says Reynolds. “But the intelligence they each offer makes us look a little smarter. Orad MVP is handling things like ball and player tracking while Paint allows content to be rendered more quickly so that something can be completed during a commercial break.

“We want to take the respective strengths of each of them,” he continues.

There is still much planning to be done for next year, with the AELTC hoping to have a plan fully firmed up by yearend. Reynolds notes that, over the years, ESPN has learned a great deal from the BBC and the AELTC and that the three entities benefitted from riffing off each other, with ESPN bringing things it learned at other majors to Wimbledon.

“I think the club will have a more robust willingness to explore and take advantage of what the venue has to offer because they will now manage it and control it,” says Reynolds. “They can extend the brand, and things can fast-track, like rail cams, common and dedicated drop areas, and extending the Henman Hill set positions.”

AELTC will spend the weeks following the 2017 tournament turning its attention to next year, but the team at ESPN will jump right into the U.S. Open Series with five weeks of events in Atlanta; Stanford, CA; Montreal and Toronto; Cincinnati; Winston-Salem, NC; and New Haven, CT. And those five weeks will be followed quickly by the U.S. Open, for which ESPN will serve as host broadcaster.