eSports in the ascendant as production goes high-end 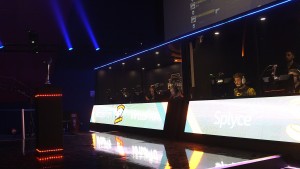 If you’re looking for the next big opportunity in sports video, eSports could prove to be a very exciting prospect indeed. “eSports are a strong and growing segment of the market and we see it continuing on the upswing,” says Jeremie Mekaelian, contribution services sales & projects director, Globecast. “Statistica reports that in 2015 there were 230 million eSports viewers, and by the year 2019 that number will almost double.”

Globecast has seen success with the DreamHack digital festival, broadcasting tournaments globally. The figures are staggering – over 1.6 million viewers watched the streamed broadcast of the League of Legends championship at DreamHack 2016. It’s not even the biggest; the Major CS:GO (Counter-Strike: Global Offensive) tournaments can draw in even huger audiences, while the international event for DOTA2  (Defense of the Ancient) in Seattle in 2015 had a prize pool of $18 million and 20 million online viewers.

Vlad Petrescu, head of broadcast at PGLeSports, says mainstream media is playing catch-up. “Last year we’ve seen some big moves by Turner Media with their Eleague CS:GO tournament and Riot Games selling broadcast rights for almost one hundred million dollars. MTG Corporation bought controlling interests in ESL and DreamHack, two of the biggest players in eSports industry. I would say we saw some improvements but we are still waiting for that big boom.”

So far this has largely been a streaming market. Twitch.tv is by far the most popular platform, delivering social media, game streaming and advertising for close to 10 million visitors daily. It’s not surprising that people are looking for ways to bridge the gap between eSports and TV coverage.

“In our experience, there’s a synergistic relationship between the two,” says Mekaelian. “On one side, eSports organisers want to reach as wide an audience as possible, but the internet can only get them so far. Television, however, has a greater reach and we see TV as a clear pathway for eSports developers to grow their business beyond what they can do online. Globecast is uniquely positioned to provide this televisual experience and bridge the gap between the two sides.”

Look at any kit list from a recent major eSports tournament event and you’ll find a host of familiar names. For example, Clear-Com’s kit was deployed extensively at DOTA 2 in Seattle last August by two of its rental partners, ATK Versacom and VER. As well as the HelixNet digital network partyline intercom system, key event areas benefitted from substantial wireless communication coverage from FreeSpeak II and HME PRO850 systems, all supported by a very large number of beltpacks.

“Given the size of the event, ensuring that the communications equipment was able to provide coverage at all corners of the event, indoors and outdoors, was critical,” says Kari Eythorsson, regional sales manager for Southwest USA, Clear-Com. “Our partners did an outstanding job in understanding the communication challenges, mapped out the best equipment for the task, and helped deploy a combination of wired and wireless systems that covered the vast area.”

Meanwhile, Blackmagic Design gear has been deployed by Fonix at live eGaming events such as Legends of Gaming at Alexandra Palace in London, as well as by NKOD which does a lot of the video production and streaming at the international Clash Royale battles during Paris Games Week and other French gaming events.

PGLeSports also uses a predominantly Blackmagic Design-based workflow for its events, which include the Manila Major. A professional DotA 2 eSport tournament, one of the biggest last year, it took place between 16 elite teams over six days for a $3 million prize in Manila. It was delivered to fans around the world using a live production system based on the Blackmagic Design ATEM 2 M/E Broadcast Studio 4K switcher and Smart Videohub 40×40 routers. It was streamed out to a global audience through Twitch.tv and mainstream broadcasters including TV5 in Manila and VIASAT in Poland.

Vlad Petrescu says eSport events typically use a lot of LED screens, lights, lasers, big PA systems, and so on – and feels that while eSports production companies can be more creative than their traditional broadcast brethren, they tend to use the same tools. 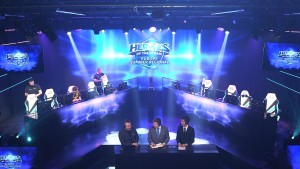 “We like good intercoms, we like 1080p60 capable broadcast cameras with tele-zoom lenses, we like technocranes, and all the new toys in the industry,” he says. “One big difference in eSports as opposed to traditional sport is that the action happens in a virtual world, a world that we control and monitor with the help of what we call ‘observers’. Most companies in eSports use one or two observers; we use five, each with specific tasks he needs to cover. Our ultimate goal is to translate real world filming techniques (like dolly-zoom) into our virtual world production; what we call ‘in-game production’.”

Telestream is also investing in eSports; its GameShow software allows gamers to stream during game play.

“The outputs are streamed live for the world to see with [image magnification] for local viewers,” says Scott Murray, VP of marketing, Telestream. “For large events, they will use a large vision mixer and for smaller events they would use something like our Wirecast software.”

Petrescu says there is a good working relationship between eSports production companies and rental companies. “Some of them have big inventories and they understood early that eSports broadcasts and eSports arena productions are very technical – and we have the budgets to sustain it,” he explains. “PGL eSports, for example, has a very good relationship with Gearhouse, a company that actively sought us out and made an effort to understand our world and provide the tools we need to do our job.”

With the likes of TV Skyline in Germany also involved in supplying full 4K OB trucks to eSports events, and recording, replay and editing technology from SAM also being deployed in this arena, it seems there’s little difference in quality from traditional broadcasts of live events.

“A stream containing higher production values often attracts and retains higher viewership numbers in a market that is becoming more and more saturated,” explains Murray. “For an eSports event production, the events are typically being produced at the arena/event for image and archival VOD purposes, so adding production value is very important and, fortunately, relatively straightforward. If you are a production company wanting to produce and stream an event, we are the ones to turn to.”

Streams on the box

GINX Esports TV is a venture with investment by Sky and ITV that was launched last October and is now available across 41 territories.

“So far people have been very supportive of our efforts to bring esports to a mainstream TV audience,” says CEO Michiel Bakker. “Our reach is growing fast, we will break through the 40 million household number in May.”

Audiences are skewed towards male sports and tech-hungry viewers, almost all of whom are under the age of 34.

“That is a tough audience for TV to reach, and we are hugely excited by the fact that we are able to attract a millennial audience on TV,” says Bakker. “Our weekly live ‘cross-game’ show The Bridge is increasingly popular, as are more quirky formats such as The First Hour. But we are also gaining traction with live tournament coverage and for those with less time available tournament cut-downs called T-Cut, which recap all the action in a more condensed format.”

“[Broadcast] sports coverage teams should be able to easily cover an esports event that is already being produced locally at the event,” says Murray. “If the goal was to create the event from scratch, rather than televising an existing event, there are significant hurdles behind the scenes in terms of technical requirements. This however does not seem likely, unless a broadcast channel intended to create their own tournament series in competition with groups like ESL and Eleague.”

However, Petrescu seems less than impressed with broadcasters, at least of a certain type. “Every time traditional sports broadcasters get involved it’s a disaster for eSports fans,” he says. “Maybe the only exception here is Turner but even they had many problems with eSport fan communities because of certain limitations traditional TV broadcasts brings with it.”

Petrescu’s suggestion? “First and most important – educate yourselves,” he says. “eSports is not gaming, it just looks like it. If you play a game on your mobile phone you are not an eSports player. Those guys you see on stage spent years honing complex skills and accumulating massive amounts of information. They should be treated with respect. The game should be treated with respect. Second suggestion is ask for advice from esports broadcast professionals that have been doing this for a living for 10-15 years, long before this was ‘the thing’.” 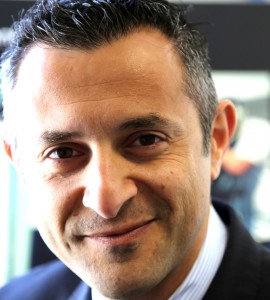 “A high-quality eSports production isn’t just about having the technology in place; it’s about working with a partner who understands how television operates as a business – not least in terms of rights management – and what the production requirements are to be successful,” says Jeremie Mekaelian. “Television has requirements that the Internet doesn’t; it’s not the same QoS. If you want to broadcast live or from a pre-recorded file, the quality has to be televisual.”

At present only a few high profile events are being shown live on the box,  and traditional programming tends to consist instead of highlight shows.

GINX’s Bakker sees these review shows providing a useful service to audiences, by condensing the vast amount of live tournament coverage into more digestible chunks. “Having said that we very much focus on providing full live coverage, as we are doing right now with the CWL and APEX Overwatch tournaments,” he adds. “Our aim is to increasingly add value to live tournaments by providing wrap around content to guide those of our viewers who are less familiar with the game in question.”

The plan is for GINX to be increase its presence to report on location, on local tournaments in addition to the international marquee events. But Bakker feels that esports also needs to change.

“In the next couple of years, it’s important that the esports industry solidifies its structures, especially in terms of co-ordinating seasons and events – much in the way that other professional sports have evolved,” he says. “If a more stable event calendar emerges, it will be easier for brands and media to align for the obvious benefit of the industry as a whole.”