In eSports productions, the sheer scale of events played in far-flung locations poses big challenges for the production teams.

The biggest is figuring out whether connectivity will allow an at-home production, whether those circuits are reliable, and whether the scale of the show is suitable for at-home production. That topic was the subject of a panel discussion at SVG’s inaugural Esports Production Forum. 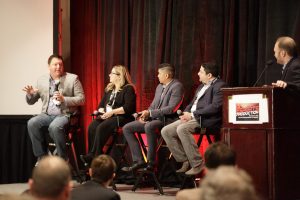 Mitch Rosenthal, head of production and operations, Riot Games, said that at-home productions help make the production efforts required around the globe more sustainable. At the recent League of Legends World Championship (commonly referred to as ‘Worlds’) in South Korea, the Riot Games team expanded on an at-home workflow that it had relied on in May during the Mid-Season Invitational in Paris.

This story first appeared on Sports Video Group US. To read more, go to: https://www.sportsvideo.org/2018/11/09/second-eleague-cup-rocket-league-2018-competition-to-live-stream-on-twitch/