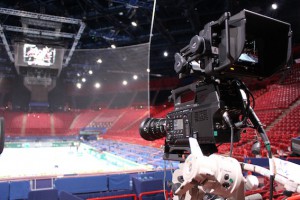 The 2013 Wimbledon tennis tournament was filmed in 4k using Sony technology. Not wanting to be overshadowed by British competition, the French Tennis Federation decided that it would in turn test Ultra High Definition in real-time. The 2013 Roland Garros tournament was therefore produced and broadcast (not live) in 4K (3840 x 2160).

AMPVISUAL TV was placed in charge of that production. The Philippe Chatrier court, where all the major matches took place, was filmed with three 4K Canon C500 cameras equipped with a PL mount, and a For-A FT-One camera.

This time around, it was Euro Media France that was assigned by the FFT to produce the 4K coverage for the Paris-Bercy tennis, which is the ninth and final ATP World Tour Masters 1000 event. For three days, four Sony F55 cameras equipped with Fujinon and Angénieux lenses captured all the matches. The Fujinon Cabrio zoom lenses have a built-in lens motor to control focus, iris and zoom. However, the Angénieux lenses required an external motor.

A fibre-optic transmission adaptor, the CA-4000, was fitted at the back of each F55 camera. In this fashion all the parameters and settings (colorimetry, exposure, etc) could then be remotely controlled by the video engineer. The BPU-4000 processors were located close to the production area.

“The cameras were connected to the Sony MVS 8000X switcher by fibre optics. As a result of this technical set-up the 4K cameras could be remotely operated exactly like the HD ones were,” explained Christophe Barbet, project manager at the Palais Omnisport de Paris Bercy.

The 4K files in 3840×2160 resolution were recorded on HDCAM SR-R1000 storage units. The monitors in the production room were also from Sony, whereas around the courts 65-inch 4K Panasonic consumer-market TV screens (TXL65WT600E) displayed the 4K video signal. A XT3 server for slow motion replays was provided by EVS.

“For the Paris-Bercy tennis tournament, we used a 50p format for video recording and this ensured perfect fluidity for slow motion at a speed of 30% as for HD,” remarked Christophe Barbet.

Vizrt provided 4K broadcast graphics. A Miranda downconverter was used to convert the 4K 50p format to HD 1080 50p and 50i, while an Axon card made the cross conversion from 4K 50p to 4K 25p. Digital Video Sud managed Clipster (recording and transcoding files).

A few kilometres away from Bercy, at the French Federation’s headquarters in Roland Garros, the 4K signal was transmitted by fibre optic via the Media links system installed by Vidi.

“We also deployed a remote production unit that was installed at the FFT head office, using four HD cameras. We could control the cameras remotely and a talkback system kept us in contact with the camera operators and the technical crew. This solution offers great prospects for the future,” concluded Gaël Tanguy, technical director of Euro Media France.