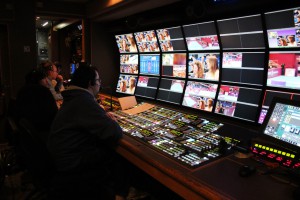 The French Ministry of Sports aims to promote media coverage of women’s sports events. During the WTA tennis tournament held in Paris, a special day on Friday, 31 January, was devoted to this objective, in partnership with Eurosport, which broadcast the entire event. Euro Media France was in charge of filming the matches.

Producers Françoise Boulain and Xavier Demuytter took turns at the controls of the Grass Valley Kayenne switcher inside the impressive 741 OB truck, which is part of the service provider’s fleet. Two LSM operators recorded and provided the slow-motion replays.

“It was a relatively classic set-up for tennis coverage as there were eight cameras including two heavy ENG cameras on filter wheels and with very long focal length lenses, a Loupe and a Beauty to cover the centre court. There were also two RF cameras used for the Eurosport feed,” explains Ilan Kharouby, who is in charge of production for Euro Media France.

The European sports channel (which is now majority-owned by the Discovery group and no longer by TF1) also used a small set for the commentary position from where journalists could present the matches and conduct interviews with guests. 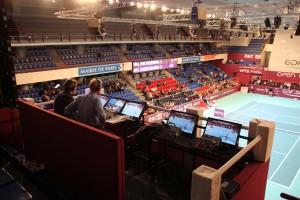 Eurosport’s commentator position was installed and managed by the Euro Media France teams, as were those of MCS and D17.

“In addition to the international signal and the Eurosport feed we also provide dedicated feeds for MCS (French sports channel) and D17 (a free-to-air channel belonging to Canal+ available on DTT),” continues Ilan Kharouby. Both channels had in fact acquired partial broadcast rights in order to air the final stages of the tournament.

Concerning scoring and statistics, Information and Display Systems (IDS) provide the technology services for all the WTA events and were also in charge at the Pierre Coubertin Stadium.

Some 30 Euro Media employees worked on the tournament, which commenced on 25 January and concludes on 2 February.