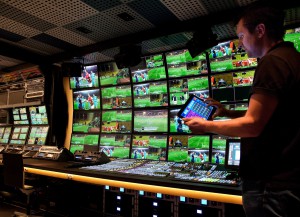 In the newly-upgraded EuroMedia OB truck, a tablet can be used to reassign almost any workstation.

Designing and building a new OB unit today are not the easiest of tasks. For a start, the economic environment and budgets of producers and broadcasters need to be taken into account. In addition, informed and sustainable technical choices must be made at a time when new techniques (for example, IP-based delivery) and formats (4K) are coming into play.

With these considerations in mind, Euro Media France decided to update its Car 21 OB unit – now known as XXL1 – and completely rethink its specification with state-of-the art tools.

“We only kept the chassis and structure of the previous truck; as for the rest everything is brand new,” confirms Dominique Bez, one of the XXL1 OB truck managers. Twenty metres long, if the tractor is included, the truck consists of triple expanding sides that can extend the usable space to 82 sqm.

Gaël Tanguy, the company’s technical director, picks up the story: “Several months ago we did a complete rethink of the technical specifications for the truck revamp. OB truck 21 was last used with its former specifications on 27 May 2014, for the Monaco Grand Prix. The very next day it was completely dismantled.”

For the record, the previous specifications of car 21 dated back to 2005, when it was upgraded to HD (the chassis dated back to 2002). This time the XXL1 has made a real leap forward with the reorganisation of its working space as well as the use of cutting edge tools.

“In order to totally revamp the truck, we relied primarily on the skills within the Euro Media group. Only the bodywork was outsourced, to Akkermans, a company based in the Netherlands,” adds Tanguy.

Engineering was carried out by a dedicated in-house team whereas the layout and interior design were assigned to Project Builders, a Belgian company belonging to a local Euro Media subsidiary, Videohouse.

The resulting Euro Media XXL1 OB truck is intended for use in major productions such as the Premier League flagship match broadcast on Canal +. The 4K-ready and full 3G-equipped truck can accommodate up to 30 cameras, 12 positions for EVS servers and about a dozen graphics systems.

Next-generation IP network equipment was of great use in the design and architecture of the XXL1. The number of video and audio cables has been greatly reduced compared to the past set-up, and thanks to IP technology a considerable amount of space has been saved.

The Snell Sirius 840 480×692 router and the LSB-VSM universal control system are the very cornerstone of the new facilities. Thanks to the VSM control system, each workstation in the truck can be rapidly and easily set-up according to the operator’s needs. In addition to being intuitive and fun to work with, the use of tablets greatly simplifies set-up. For example, the OB truck manager can easily reassign almost any workstation using his own tablet.