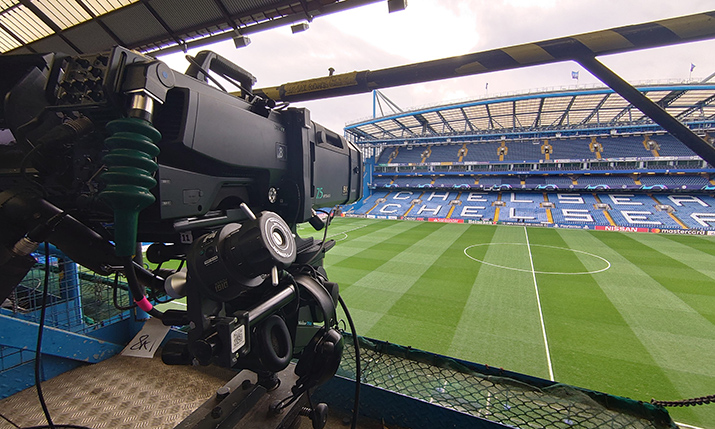 To develop a live HDR workflow that works from end-to-end and delivers on image quality, EMG and Sony created a solution based around Sony’s SR Live workflow. Integrating Sony HDC-3500 cameras, the HDRC-4000 HDR processor and BVM-HX310 reference monitors, the set-up uses existing SDR workflow and operational practises as a basis.

The collaboration also covered a phase of training to upskill EMG’s technical staff, through remote training modules delivered from Sony’s facilities in Pinewood Studios to EMG’s Paris office in the summer of 2020.

Canal+ can now deploy HDR at any sporting event within its schedule and began broadcasting live sport, including its football programme, to HDR viewers in August 2020. EMG was commissioned by UEFA to supply the host broadcast production of the UEFA Super Cup in Budapest with its next generation UHD/HDR truck Nova 103 delivering images of the highest quality.

The Nova 103 truck will be part of the fleet of UHD/HDR trucks which EMG will operate during this year’s UEFA Euro 2020 championship.

Gaël Tanguy, CTO at EMG France, said: “The brief from our client was very much about providing viewers with a new HDR experience, while keeping legacy SDR customers with the best result, through a single operation. Working with Sony and Canal+ on HDR workflows has allowed us all to think strategically rather than just concentrating on one part of the supply chain. The HDR workflow solution we are utilising now is accessible to all and operated by our engineers independently thanks to training from Sony.”

Francois-Charles Bideaux, co-CEO at EMG, added: “A major part of our UHD fleet is now equipped with HDR and all of our new trucks are being equipped with the same quality standard by default. We thank Sony for their contribution to achieving our goals.”

Hiroshi Kajita, head of media solutions at Sony Professional Europe, commented: “At Sony, we always listen and work closely with our partners to provide solutions to meet their evolving needs. We are focused on unleashing the incredible power of images, drawing ever closer to the ultimate desire for the images we see on our screens to mirror what we see with the human eye.

“Working in partnership with Canal+ and EMG we found a unique solution and implemented an end-to-end HDR workflow that is already creating great results.”